SHOCKER: Sandals Will Not Run for Re-Election in 2018. 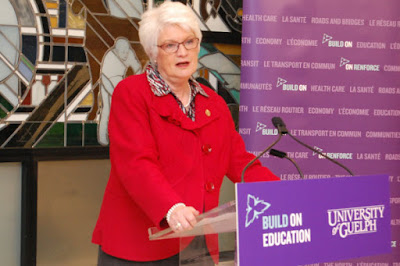 In a surprise announcement today, Guelph MPP and President of the Treasury Board, Liz Sandals, announced that she will not seek re-election in 2018. "After a summer of discussion with my husband and children, I have made the difficult decision to retire – and so I will not be running in the next provincial election," she said in a statement.

Until this point, Sandals has been coy about her potentially being a candidate for the fifth time in 2018. She told Open Sources Guelph back in August that she was going to make a decision before Christmas. Then, in September, Sandals told GuelphToday.com that she hadn't "sorted out" the question of her decision to run again.
Sandals was elected as part of a "red wave" that swept Dalton McGuinty and the Liberals to office in 2003. Sandals is one of 14 Liberal MPPs that have served at Queen's Park since that vote, including the current Premier Kathleen Wynne. Oddly enough, Sandals' cabinet colleague and fellow member of the 2003 class, Deputy Premier Deb Matthews, also announced today that she will not be seeking re-election next spring.
"I will not be seeking re-election in London North Centre next year," Matthews said in her statement. "I am, however, excited and honoured to continue to serve as co-chair of the election campaign, and will begin to explore opportunities for the next chapter in life on June 8. While I don’t know what that will be, I most certainly will continue to find ways to engage in public service."
As for Sandals, she says that the next phase of her life is as a "fulltime grandmother", but it's also her intention to finish out the term in her dual role as Guelph's provincial representative and cabinet minister. "I look forward to continuing to help this government achieve its objectives over the coming months, and to supporting the Ontario Liberals through the 2018 election," Sandals said.
Sandals began her public career in 1988 when she was elected as a school board trustee after years teaching computer science at the University of Guelph. She made the transfer to provincial politics in 2003 when she ran for the Liberals and won with over 42 per cent of the vote. She's been re-elected four times, and with never less than 40 per cent, which made her one of the most reliable and electable members of the Liberal caucus. She served in a number of parliamentary secretary positions, including under then-Minister of Education, Kathleen Wynne, who made Sandals the new minister when she became premier in 2013. Sandals became President of the Treasury Board in 2016.
To the people of Guelph, Sandals extended her gratitude. "It has been an absolute privilege to represent you for the last fourteen years, and I’m so proud to have fought for our community for so many years," she said. "This wouldn’t have been possible without the many volunteers who have supported me over the years by knocking on doors, hammering in signs and fighting for our shared vision of an Ontario that values fairness and equity."
Presently, the only declared candidate for the 2018 election in the riding of Guelph is Mike Schreiner, leader of the Green Party of Ontario.


Liz Sandals Retirement Statement by Adam A. Donaldson on Scribd

UPDATE (4:30 pm) Green Party of Ontario leader Mike Schreiner has released a statement on Sandals' announcement.
"Thank you Liz, for your service to Guelph and Ontario. Thirty years is a tremendous gift," he wrote. "I admire your perseverance and commitment to public service. I appreciate your respectful approach to politics. And your friendly waves to me in the gallery at Queen's Park.
"Thank you for your commitment to Guelph and Ontario. I wish you all the best in your next months as MPP and beyond," he added.

Thank you Liz Sandals for your service to Guelph and Ontario. Thirty years is a tremendous gift. Thank you. #onpoli
— Mike Schreiner (@MikeSchreiner) October 6, 2017