VIDEO: Guelphites Walk for Freedom, and to End Human Trafficking 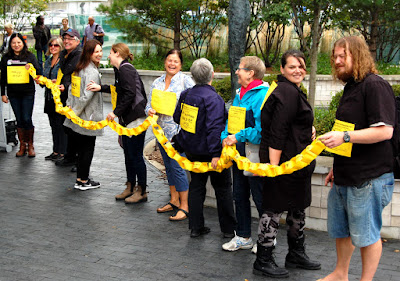 In a world that is already often dark and disturbing, we rarely like to be reminded of how dark and disturbing it can really be. Guelphites though dared to challenge that darkness Saturday morning by Walking for Freedom, in an event aimed to raise awareness of, and help put a stop to human trafficking.


Guelph's was one of several Walk for Freedom events held worldwide Saturday. The local event, organized by former mayoral candidate and community activist Joseph St. Denis, was supported by Guelph-Wellington Women in Crisis, Victim Services Wellington, the Canadian Federation of University Women, and the Guelph Resource Centre for Gender Empowerment and Diversity. "In Guelph, we are holding this walk downtown to raise awareness and provide local resources to support individuals impacted by human trafficking in and around our community," said the Facebook page promoting the event.
The blight of human trafficking accounts for less than one per cent of all reported police incidents, but according to experts, this is just the tip of the proverbial iceberg. According to Stats Can, in 2014 there were 206 police-reported violations of human trafficking in Canada; 93 per cent of the victims were women, 47 per cent of victims were between the ages 18 and 24, and one-quarter were under the age of 18.
So before going for the walk, St. Denis, Ward 3 Councillor Phil Allt, and Kathryn Cummings of Victim Services all spoke to the importance of taking a stand against human trafficking. And then they, along with more than 50 other people, walked around the block up Wyndham, down Woolwich, and around back to city hall.
Check out the below video of some of the speeches, and to see your fellow Guelphites march. 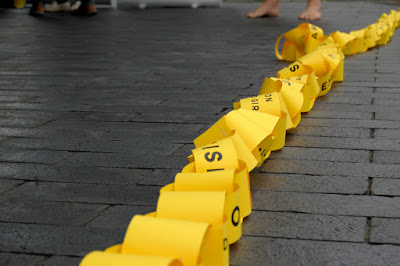