What Kind of Change.org Does Guelph Want Right Now? 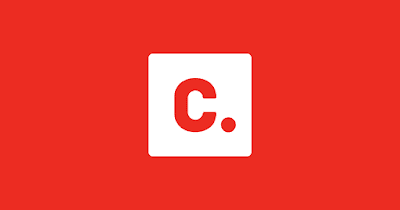 What matters to the people of Guelph? That's a question those of us in the media struggle with all the time. So I decided to look at the website Change.org to see what people in Guelph have been caring about this summer, and what issues, ideas and challenges they're trying to draw attention to. Think pets. Think transit. Think the environment. See what difference some people on Change.org are trying to make for Guelph below. 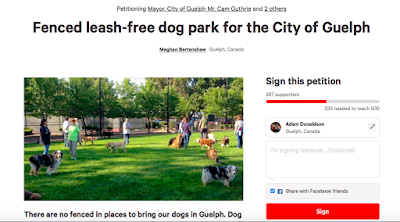 Petition For: Fenced leash-free dog park for the City of Guelph
What's It About? There are no fenced in places to bring our dogs in Guelph. Dog parks provide a great place for dogs and their owners to socialize and get exercise.
Supporters: 267 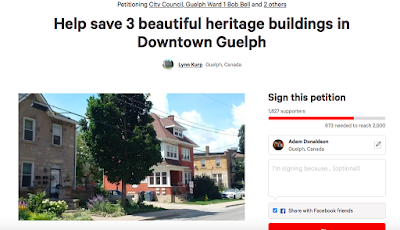 Petition For: Help save 3 beautiful heritage buildings in Downtown Guelph
What's It About? Three beautiful buildings owned by St Andrew's Church in Downtown Guelph are being considered for demolition by the church in order to erect affordable apartment buildings downtown. These buildings are already in use as affordable housing. [...] It would be a shame to destroy 3 historical buildings, to build another ugly apartment building on this quaint street.
Supporters: 1,827 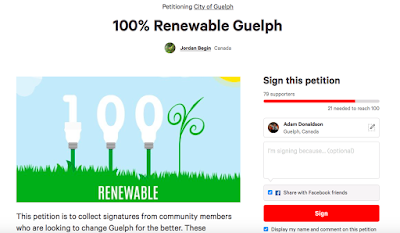 Petition For: 100% Renewable Guelph
What's It About? As one of our projects, we wanted to convince the people of city hall to commit to making a plan that would make Guelph 100% renewable. We feel it is important, as our generation will experience the greater effects of climate change and this is our future.
Supporters: 79 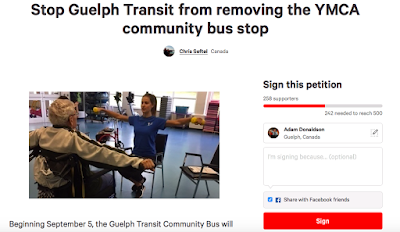 Petition For: Stop Guelph Transit from removing the YMCA community bus stop
What's It About? Currently, the only stop being removed from the route is the YMCA stop, which is used by many Guelph community members to access these facilities each day. By keeping the current route, adding a stop at the YMCA on the 7 Kortright Downey conventional route, or coordinating multiple mobility buses, our members can continue attending these exercise programs that contribute to their quality of life.
Supporters: 258 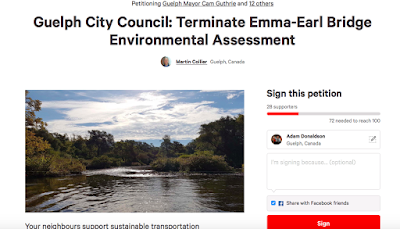 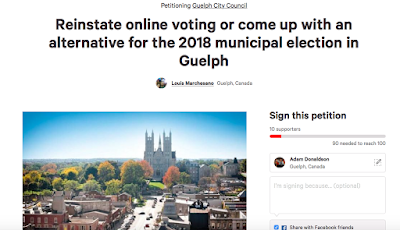 Petition For: Reinstate online voting or come up with an alternative for the 2018 municipal election in Guelph
What's It About? Of the 86,574 of eligible voters, 45% participated in the last election and 12,768 of those ballots were cast online. Compared to 2010 where 28,072 ballots were cast or about 33.91%. 2014 had seen a little over an 11% increase in ballots cast. The solution is simple, reinstate it... or come up with an alternative like phone in ballots or mail in ballots to make it more accessible.
Supporters: 10 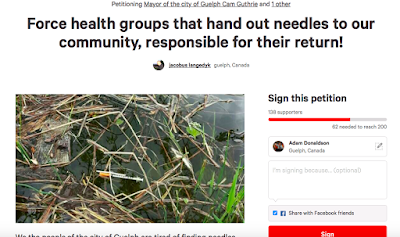 Petition For: Force health groups that hand out needles to our community, responsible for their return!
What's It About? It is well documented how rampant the needle issue is here in guelph aswell as other drugs and we the citizen's of Guelph want something done. Catching frogs with your kids,trail walking and fishing,or even a simple visit to the park should not be interrupted by dirty needles that put us all at risk.
Supporters: 138
Posted by Adam A. Donaldson at 4:30 PM