Residents and Activists Stop Chainsaws for the Day at Lafarge 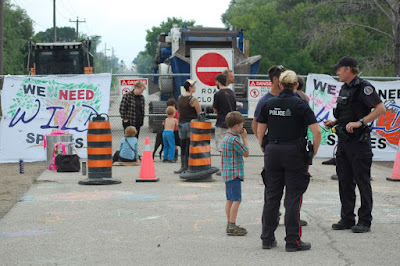 Thursday night, a group called Friends of the Howitt Creek sent out a press release to all local media, the City of Guelph, and the developers of the Lafarge site to let them know there would be no trees cut down on Friday. They were going to protest...

As good as their word, the protest began at 7 am. A small group of area residents, environmental advocates, and kids gathered at the south end of Silvercreek Pkwy. S. where a temporary fence had been erected to block off traffic. Heavy equipment had begun to be moved into the area this week, and a small section of trees had been already cut down thus prompting concerned people in the area to act, and quickly organize the protest. 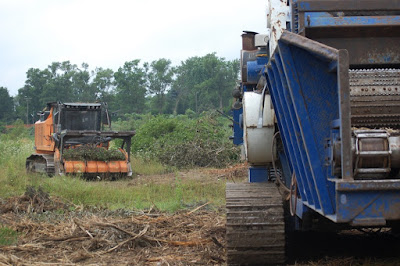 The one day affair, it's hoped, will demonstrate to the City and the developer the displeasure of people in the neighbourhood for the way this situation has been handled, both the approval of the removal of almost 2,000 trees and the fact that no development plan for the site has yet been filed with the City.

Back at the Lafarge site, where protest is in full effect. Nearby, heavy construction equipment has begun its ghastly work, but here area residents and activists are occupying the entrance to Silvercreek Pkwy S to save the precious wilderness. More to come.
A post shared by Adam A. Donaldson (@adamadonaldson) on Aug 4, 2017 at 7:54am PDT

The present state of the site shows the contractors hired are crossing their I's and dotting their T's. The City of Guelph approval is attached there at the fence for people to see, and temporary barriers have been erected around areas and trees being protected, including an old bur oak on the west side of the property.


Just so you know, the contractor's paper work is in order... pic.twitter.com/q9xqaMb4gT
— Adam A. Donaldson (@adamadonaldson) August 4, 2017 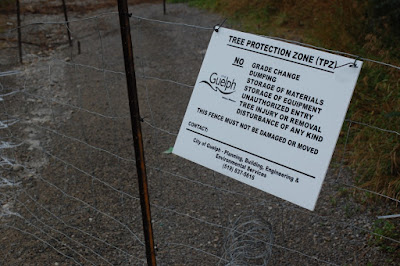 As people talked and kids played at the fence, an employee of the contractor arrived at the site to move the equipment onto the main road under the supervision of two members of the Guelph Police Service. I was told that the police arrived shortly after the employee did to make sure everything went smoothly as the equipment and site were secured for the long weekend. The developer agreed that no work would take place on the site today, or through the long weekend.
There was, however, one moment of tension when I was on site. The trucks were moved from off road about halfway between the fence and the CN train tracks and driven right up to the fence line as many people sat there. Let's just say the large trucks got rather close for comfort.

After a frankly tense moment, the worker has left the site, and so to have the police. This is a one day protest, and the protesters are hoping that the city, the developer, and the mayor hear their message. Politico posts (yes, posts) coming soon.
A post shared by Adam A. Donaldson (@adamadonaldson) on Aug 4, 2017 at 8:25am PDT


Up the road, where the trucks once sat, it was clear that the deforestation of the Lafarge site had begun. Sadly, one day of protest may not be enough to avoid the inevitable.


A portion of the Lafarge site that has already been cleared. pic.twitter.com/1IvXPSFTQa
— Adam A. Donaldson (@adamadonaldson) August 4, 2017


I'll have an interview with one of the organizers of the protest in a later post.
Posted by Adam A. Donaldson at 12:30 PM