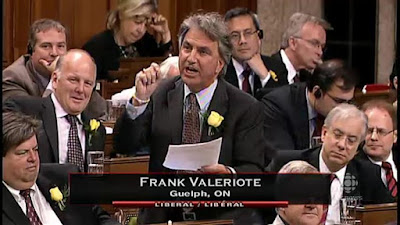 Just because it's Frank Valeriote's last week on the job, doesn't mean he's going to leave without one last accomplishment. Today, on Valeriote's last day on Parliament Hill, a private members bill he shepherded though the Commons received Royal Assent, and it will be to grieving Canadian families who will reap the benefit of Valeriote's last act as a legislator.
The legislation in question, Bill C-247, is "An Act to expand the mandate of Service Canada in respect of the death of a Canadian citizen or Canadian resident, calls on the Minister of Employment and Social Development to establish Service Canada as the single point of contact with the Government of Canada for reporting the death of a Canadian citizen or resident," according to a press release from Valeriote's office.
"While it is with a heavy heart that I leave the House of Commons for the last time today, I’m filled with pride having piloted the passage of a piece of legislation that I can point to that demonstrates what we have accomplished here as a Parliament for the betterment of all Canadian in Bill C-247," said Valeriote in a press release.
What that means is that Canadians will only have to deal with Service Canada when a loved one dies rather than engage with the various government offices they would normally have to notify in order to handle the departed's estate. On the one hand it gives the bereaved a break from the bureaucracy during a difficult time, and on the other it saves the government paper work and money by not having staff across several offices dealing with the same matter. In fact, if it weren't for the death of loved one, you'd call this a win-win.
"Where we can, we must provide relief and facilitate easier interactions with the federal government, especially during difficult times," Valeriote explained. "As parliamentarians and public servants, it is paramount that we find ways to ease the burdens of our constituents and all Canadians. Among the most difficult experiences we might face is the loss of a loved one."
Valeriote thanked Hospice Palliative Care Ontario, Bereavement Ontario Network, the Canadian Association of Retired Persons and the Funeral Service Association of Canada for their support in getting Bill C-247 passed. Elder care and end of life planning were amongst Valeriote's legislative priorities during his tenure in the House of Commons, so this was a nice going away present for him.
The House will return on September 21, but it's widely suspected that Prime Minister Stephen Harper will ask the Governor General to drop the writ before that.
Posted by Adam A. Donaldson at 2:13 PM