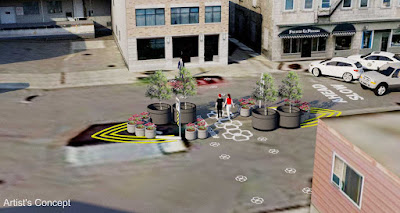 In a move that's sure to be a hit with everyone that thinks Downtown Guelph already caters too much to the hippie/dippy side of the War on Cars, the City of Guelph has decided to cordon off a portion of Macdonell St. at it's western end, right in the middle of the road, and make it a tourist trap. Say what? Yeah, like say have you ever wanted that perfect shot of the religious establishment formally known as the Church of Our Lady, right there front and centre? Well, for a summer test trial, the City is going to give shutterbugs of all stripes, local and foreign, the perfect vantage point. Right in the middle of a busy downtown intersection. If this isn't the biggest thing to hit downtown since pissoirs I'll eat my hat.


Read the full press release from the City of Guelph below:

Guelph, ON, June 12, 2015 – This summer, pedestrians in Guelph’s downtown will notice a change to the streetscape on Macdonell Street and improved directional signs throughout the core.

On or about June 18, the City of Guelph will unveil a temporary pedestrian island on Macdonell Street at Wilson Street. Installation is expected to take place earlier in the week with minimal impact to traffic.

This feature—an urban design element of the Downtown Streetscape Manual —will allow visitors to take advantage of the signature view of the Basilica of Our Lady and Catholic Hill as they walk through the downtown to view the new John McCrae statue at Guelph Civic Museum. The pedestrian island will include four large and 16 small planters with red flowers and small trees. The informal “crosswalk” consists of white poppies painted on the roadway—a nod to this year’s 100th anniversary celebrations of Lt.-Col. John McCrae’s poem ‘In Flanders Fields.’

“The pedestrian island provides a unique vantage point for visitors to admire and photograph the Basilica of Our Lady. And with so many visitors expected to see the John McCrae statue this summer, the island becomes another feature in our downtown,” says Marty Williams, executive director of the Downtown Guelph Business Association.

In addition to the pedestrian island, the City is testing a wayfinding initiative designed to improve the visitor experience downtown by installing temporary signs and directories to assist people in finding their destination or other points of interest.

“This project showcases a fun, imaginative way of reimaging the downtown streetscape, allows us to test an idea from the Downtown Streetscape Manual, and improves the pedestrian experience by connecting visitors to John McCrae celebrations at the Guelph Civic Museum and to major downtown spaces and local businesses,” says Ian Panabaker, corporate manager of Downtown Renewal.

Williams adds, “Guelph’s downtown is walkable and compact but with a unique layout and so we anticipate the new directional signs will make it easier for visitors to navigate their way along city streets to some of the great features and destinations found downtown.”

Doug Minett, co-chair of the Downtown Advisory Committee, says committee members are excited to test out some long-standing ideas about improved pedestrian signage, streetscape improvements and wayfinding for the downtown. “This pilot is a chance to put our best foot forward with visitors to Guelph and create an additional photo opportunity over the summer months. We look forward to seeing how the tests will inform future discussions for longer-term initiatives.”

From a tourism perspective, Stacey Dunnigan, supervisor of Tourism and Farmers’ Market, agrees.

“Guelph has so much to offer and there are many points of interest in the downtown. As a way for people to share their visitor experience we are asking them to take a #guelphie2015 and share their pic with us @cityofguelph or on Facebook.”

This pilot project is a collaborative effort between the City, Guelph Civic Museum, the Downtown Guelph Business Association and Downtown Advisory Committee.