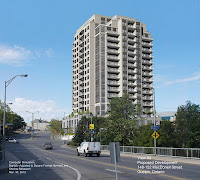 Talk about places to grow, it now appears that statement includes the skyline in Guelph. Last night, council approved the construction of an 18-storey condominium tower for the corner of Macdonell and Woolwich streets. To some this is a sign that Guelph is growing up, to others this is a scary sign of things to come. But the mandate was clear, only three councillors voted against the proposal from Tricar.
But in typical Guelph-ness, what was the biggest problem with the development people had: it was ugly. U. G. L. Y. This condo has no alibi. And while their may be some room for "twearking" City planner Stacey Laughlin told the Guelph Mercury that the final design, the building will look “substantially” as it does in concept drawing.
Personally, I'm not sure on a condo building how much room there is for variety, but on the recent edition of "Beyond the Ballot Box" on CFRU, we pondered if the real concern was if people didn't want another Park Mall in downtown. A legitimate concern, perhaps unavoidable, but perhaps the zest Tricar is pursuing this plan with is indicative of a legitimate desire some people have expressed for condo living downtown. I guess we'll see as the project moves forward.
Naturally, the City is quite pleased with the approval, and they even sent out a press release to celebrate.
GUELPH, ON, May 8, 2012 – Council approved the first residential development designed to attract more people and jobs to the City’s core and continue building downtown’s vibrancy and vitality.
Council considered and approved applications by Stantec Consulting Ltd., on behalf of The Tricar Group, for Official Plan and zoning by-law amendments to permit construction of an 18-storey building at the northwest corner of Macdonell and Woolwich Streets. It is expected to have 130 residential units and ground-level commercial uses.
Currently, underground water and sewer services are being removed from the property to allow clean-up of the brownfield site to be completed.
Last week, with broad community support, Council approved its Downtown Secondary Plan. The plan contains a comprehensive vision to revitalize downtown Guelph over the next 20 years and calls for significant residential development to complement more commercial and employment uses.
"We’re very excited. This is the first new downtown residential development we’ve seen in more than a decade, and we hope to see many more people living downtown in the next 20 years," said Ian Panabaker, corporate manager, downtown renewal. "As Guelph continues to grow, we’ll see a mix of low-rise, mid-rise and high-rise buildings. Taller ones like this will be located on four low-lying sites at the edge of downtown."
The new residential development will complement several downtown renewal projects already underway. These include Market Square and Guelph Central Station. On Sunday, May 13, Guelph Transit will join GO trains and VIA Rail service when it moves its hub to the station.
"We’re starting to see our plans for downtown Guelph become a reality," added Panabaker. "We know the city will grow and change over the next 20 years, and we are prepared to manage that growth in ways that benefit the entire community."
Posted by Adam A. Donaldson at 5:07 PM

We also passed an amendment that bans Antenna's on the building like the UGLY mess on top of the Park Mall. The developer agreed to put this within the condo agreement for those that purchase any of the units. Hopefully that will help with some of the issues many have with the Park Mall.
Cam