Ford to Star Reporter "Get Off My Lawn" 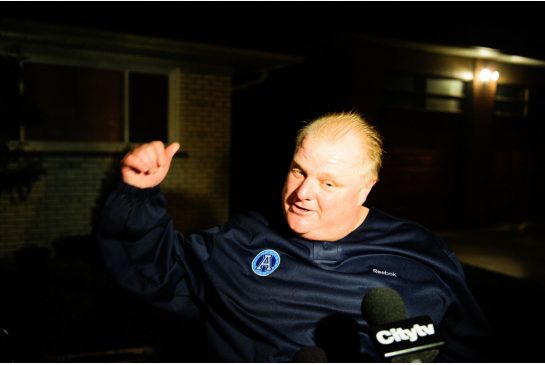 Because you asked for it! It's time for another Rob Ford controversy, and this maybe the most bizarre one yet, and that friends is truly saying something. From the producer of such fine hits as "F#@$ you and your kids for pointing out my illegal cell phone use while driving," and "Gay Pride? But I've got to go to my cottage," and "Get this 60-year-old comedienne dressed as a fictional warrior princess away from me! Help! Police!" comes the brand new "Dale the Mennis" or "Get the hell off my lawn you punk Toronto Star reporter!"
Actually, talking about the events of last night using those descriptions probably doesn't do them any justice. If you read article posted to the Toronto Star it describes what sounds like a rather harrowing ordeal. If you look at the picture of Daniel Dale, and compare it the image of Rob Ford you hold in your mind's eye, factoring in his well-known explosive temper, you can paint a pretty vivid tableau of how events might have unfolded last night.
Now to be fair, only two people know what really happened, and a police investigation already in progress will determine who, if anyone, was in the wrong, but the fact of the matter is that whether or not Dale was in the right or the wrong, we're once again caught in a situation where the mayor of North America's fifth largest city is acting very un-mayorly. Would New York Mayor Michael Bloomberg be caught in his sweats chasing a reporter? Would Chicago Mayor Rahm Emanuel? I highly doubt it, and not just because they have tighter security than Ford.
What we have here is an extension of Ford's long-standing feud with the Toronto Star, a paper that doesn't lavish him with praise and ergo has it in for him. Dale has been covering City Hall since Ford was elected, and thus should not be a mysterious face to even the normally media-shy mayor. The incident also occurred at around 7:30 to 8 pm, so not exactly the dead of night. One's reminded of Ford's explanation about how Mary Walsh and the 22 Minutes crew accosted him as he was taking his kids to school in the cloak of darkness of the pre-dawn hours. Ford's story had so many plot holes, not even hack Hollywood producers could see the value.
I will give the Mayor credit though, it's probably pretty easy to find out where he lives, and it's probably pretty easy to suspect, or at least be concerned, that your security's at stake. Perfectly understandable and I believe why he was looking to buy the tract of park land Dale was investigating to begin with. But as is typical with Ford's style, he decided to shoot first and ask questions later. He went from zero to sixty on the reaction scale, and even if the incident wasn't as bad as Dale describes, I can certainly understand how he might see it that way.
Of course the potential outcome of such an incident might have been moot if a) the mayor had not reacted the way he did, and b) if Ford and Star reporters had a less adversarial relationship. Of course, any relationship between a politician and reporter is going to be adversarial, but if Ford could have trusted that Dale was vetting a real story, and if Dale felt comfortable explaining to Ford in advanced that this is what he was doing, then this incident need not have ever happened in the first place. But it did, and now we have another nominee for the Mayor Rob Ford Blunder Hall of Fame. It's a wonder they have any room left.
Posted by Adam A. Donaldson at 3:16 PM