I guess the fact that the government didn't fall last week isn't dissuading Tim Hudak from doing a campaign style swing through the province, and this Thursday, he'll be in Guelph for a townhall.
Kidding aside though, it should be fun. I can't remember the last time a party leader was in town for a public meeting (at least in a non-election context).
Here's the press release I received this afternoon from the Guelph Provincial Progressive Conservative Association (GPPCA)


Tim Hudak is holding a Town Hall Meeting in Guelph this week!
Guelph – May 14, 2012 – This is to announce that Tim Hudak is coming to Guelph on Thursday, May 17, 2012 for a Town Hall Meeting that is OPEN TO ALL GUELPH RESIDENTS!
Mr. Hudak, the leader of the Ontario PC Party and of the Official Opposition at Queen’s Park, wants to dialogue with Guelph residents about current Ontario issues and the concerns and priorities they have for the provincial government over the next year.
This Town Hall Meeting will be held on Thursday, May 17th in the Training Room at the Victoria Road Recreation Centre, 151 Victoria Road N., Guelph, ON from 7:15 a.m.to 8:30 a.m. This is an event for the entire community, not a PC Party event. Everyone is invited to attend. 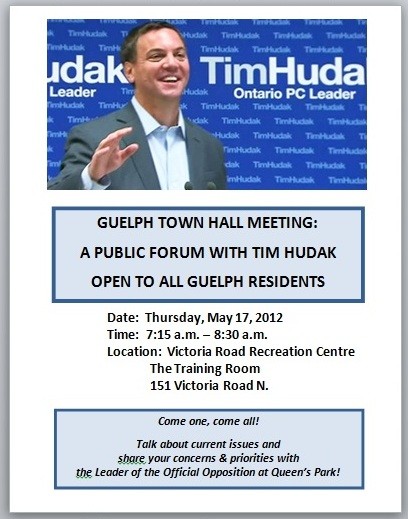