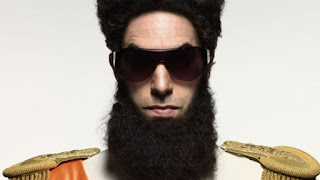 It's all in good fun of course, but when Sacha Baron Cohen was recently interviewed by George Stroumboulopoulos in character for his new movie The Dictator, the self-styled Admiral General Aladeen had words of (faint) praise for Canadian Prime Minister Stephen Harper.
“If there was ever an argument against democracy, it is Stephen Harper," said Cohen as Aladeen. "I commend your leaders on silencing your media. For the last 10 years, I have not even heard a single noteworthy event happening in Canada.”
Cohen was, of course, referencing the news last month that the Harper government's received the Code Of Silence Award from the Canadian Association of Journalists.
You can see the clip from the Strombo show below:

The full interview airs on George Stroumboulopoulos Tonight on Tuesday, and The Dictator opens in theatres on Wednesday.
Posted by Adam A. Donaldson at 1:20 PM

Tere is my halloween custome for this year!!