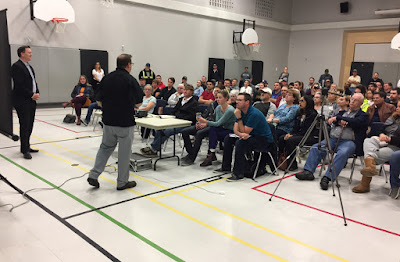 Who would have guessed that the most contentious issue of this municipal election year might be the width of driveways in certain neighbourhoods? This topic gathered people from across the east end of the city, and from other parts of the Guelph to attend a town hall hosted by the mayor and the Ward 1 councillors.

About 125 people packed the gym at William Winegard Public School, many with stories to tell, and many with a head of steam to make sure the city government heard their issues. “Clearly we’re on to something here,” said Councillor Dan Gibson.
"This is an amazing turnout, but we’re not going to solve this issue tonight," he added. "We’re in politics, things take forever, but you will see action sooner rather than later."
But what is behind this driveway disgruntlement? When did City of Guelph bylaw become the “driveway police", as one person described it?
"We believe that one person was complained against - for good reason - and we believe that this person went and complained against a whole host of others," explained Mayor Cam Guthie. Since bylaw compliance is complaint driven, they have to respond, but the mayor posed the problem thusly,"Is this really a problem, or is this a grudge?"
"The problem" has to do with the size of driveways. Guelph bylaw demands that people's cars are "required to be within the permitted driveway and cannot be on any portion of the grass or landscaped open space." In certain types of semi-detached housing developments, the zoning bylaw states that "The Driveway and Garage shall not constitute more than 50 per cent of the Front Yard."
For most newer developments, that means enough room for two cars, one in the garage and one in the driveway, but as many people in attendance at the town hall pointed out, this is not as clear cut in the practical reality.
Consider that room in a garage might be taken up by bikes, or recycling bins, or other storage. Consider too that our less-than-affordable housing situation, plus an aging population, is creating more generational households; children, parents, and grandparents who all may drive, and who may all have need of a car.
But in so much as the issue around driveways is trying to accommodate household needs with City bylaws, the other part of the issue is the seemingly over-zealousness of bylaw staff.
One woman told a story about installing a cement sidewalk right next to her driveway, and then two weeks after completion, she received a letter informing her that she had to put planters along the sidewalk just to affirm that this was a sidewalk and not an illegal expansion of the driveway. Done deal, right? Well bylaw still issued a summons, and the woman had to pay the $615 fine. When she offered her communique with bylaw, she was told that she was taking its contents "too literally."
Another woman, Virginia, thought she had a medical exemption from the City allowing her and her husband to park side-by-side seeing as how he arrives home late, and she has to leave early in the morning for medical appointments. She had a note from bylaw stating as much, but when she was summoned to court, she says the prosecutor told her that the note, "didn't mean anything."
Someone else told a story about applying for an exemption with Committee of Adjustment, for which the application alone is $800* and it's non-refundable. The vice chair allegedly told this woman that if she wanted to park three cars in her driveway then she should have been able to afford a bigger house.
Others told stories of moving into a home where the driveway has extended, and are now hearing from bylaw that they're on the hook for fines. One woman said that she just sold her home and is moving out of province, but she may be leaving the new owner with a bylaw situation over an extended driveway that was built long before she moved in four years ago.
In another story, a resident described how they bought a house and were told that said house had enough parking for three cars. After six years, they received a letter last week that they were in contravention of bylaw.
Although the town hall was mostly civil, there was obviously a lot of anger just beneath the surface, and sometimes it boiled over.
There were the ones that felt their home was their castle and that bylaw enforcement was encroaching with a heavy hand, and little compassion.
There were those that were mad about the apparent unfairness of how the bylaw enforcement was being applied, feeling like they were targeted, or singled out, among a field of other bylaw scofflaws.
Others were mad at city council for their inaction. "Every councillor should be here tonight," said one man who told the crowd that he has been in touch with his ward councillors, Ward 2's James Gordon and Andy Van Hellemond, for over a year-and-a-half on this file to no avail.
Even councillors in the room were not spared though. Bob Bell in his one and only comment of the night said, "It’s not a perfect world," and suggested that "We need to make this a neighbourhood issue rather than a city wide issue," which got some very angry responses from many people in the room. Bell seemed to be suggesting that there were some local solutions in the neighbourhood that could be explored before a council option.
As for the council solution, Gibson and Guthrie indicated that a notice of motion on this matter will be coming forward to council soon, which could suspend the driveway provisos of the residential bylaw until a review can take place.
"I hope you have sensed that we care about his issue, that you’ve heard, that we’ve been listening, and that we’re going to bring something forward to council as soon as we can," Guthrie said in conclusion.
*Correction: The amount to appeal to Committee of Adjustment is $800 and not $1,800 as previously stated.
Posted by Adam A. Donaldson at 1:38 AM