75 Dublin: They Hate It. They Really, Really Hate it 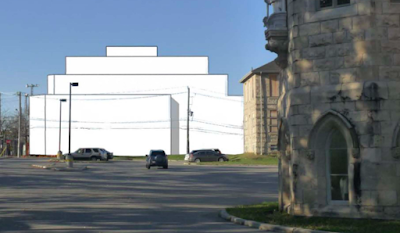 If the way to measure a good decision is to make sure nobody's happy with it, city council did a heckuva job last month when they passed the bylaw allowing for the construction of a four-storey condo tower on Catholic Hill. The bad news? All parties have a recourse for their dissatisfaction. We're off to the Ontario Municipal Board, folks!


As noted in a Guelph Today article, three parties have gone to the OMB with four different appeals to the proposed development of 75 Dublin St. N.: Rykur Holdings, the Old City Residents Association (OCRA) neighbourhood group, and the Upper Grand District School Board (UGDSB). Rykur Holdings has filed two appeals, one for the zoning and another for the City's Official Plan. Meanwhile, the UGDSB has concerns about the development's proximity to Central School, while the ORCA doesn't like the potential effect the building's construction will have on the area's heritage. The deadline to file appeals with the City of Guelph was last Wednesday.
At the November 30 meeting, council passed the staff recommended four-storey plan for the building site, but the original proposal by Rykur and developer Tom Lammer was for a five-storey building that could take advantage of federal infrastructure money by including affordable units for seniors, but Lammer told council that he could not make an economic case for building the affordable units if the project was less than five storeys. It's worth pointing out that the OMB appeals are almost a moot point now. As Mayor Cam Guthrie said on a recent edition of Open Sources Guelph, the federal money at the heart of the forced, speedy deliberations has since moved on to other parts. But even if it hadn't, the OMB appeal would virtually guarantee that construction couldn't begin on time to meet the federal government's deadline for shovels to be in the ground, which was the end of the fiscal year on March 31.
So now the number of Guelph cases before the OMB is an even dozen. We'll have to see where this goes in the new year...
Posted by Adam A. Donaldson at 6:00 PM