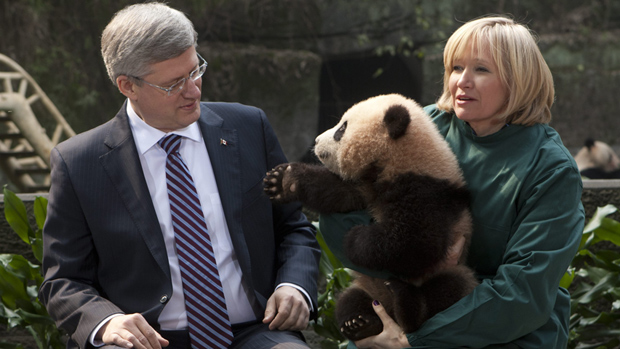 Today, the whole country was in a tizzy because two panda bears arrived at Pearson Airport. The two bears, a male and female whose names I couldn't be bothered to look up, will be spending the next five years at the Toronto Zoo before spending the five years after that in Calgary. It's a big deal because a) pandas are awesome and b) it was a deal negotiated by Prime Minister Stephen Harper himself on a trip to China last year.
Now, I have nothing against pandas, they're endangered creatures worth saving, and I'm sure the millions of people who will visit the animals in both zoos will get something valuable out of it. What Harper got yesterday at Pearson was a great photo op, but meanwhile in Ottawa, right outside the PM's office building no less, his presence as envoy might have been slightly more appreciated to people desperately in need of political appreciation.
A group of Aboriginal youth called collectively the Nishiyuu Walkers arrived in Ottawa yesterday. Initiated by an 18-year-old named David Kawapit Jr.,who lives in an isolated community called Whapmagoostui in northern Quebec, the Nishiyuu Walkers, inspired by the Idle No More movement, embarked on a 1,600 kilometre trek from their home on the coast of Hudson Bay to Victoria Island in the Ottawa River and on to Parliament Hill. The walk by Kawapit and about half dozen others became a greater inspiration, and by the time the group arrived in Ottawa yesterday they were 270 strong, according to organizers. In a day and age when the apparent laziness of youth is remarked upon and lamented, nearly 300 people made a 1,000 mile journey on nothing but their own two feet, with the supplies on their back, in the middle of a harsh, northern Canadian winter.
Perhaps they should have done it wearing panda suits.
It wasn't all bad news as there were dignitaries there to greet the Nishiyuu Walkers. Green Party leader Elizabeth May was there and criticized Harper for not. “It says a lot that Stephen Harper isn’t here, that he’s greeting the pandas,” said May. “It says a lot that we need to move heaven and earth to meet First Nations on a nation-to-nation basis with respect.”
On the governmental front, recently installed Aboriginal Affairs Minister Bernard Valcourt offered to meet with some of the youth. It was a move oddly reminiscent of when Harper nudged then Aboriginal Affairs Minister John Duncan to meet with Attawapiskat chief Theresa Spence during her hunger strike at the end of last year rather than meeting Spense's demand and meeting with her himself. “I’m going to be listening,” Valcourt said to the Globe and Mail. “This is about informing myself about their concerns.”
Now before you ask, "Shouldn't as Aboriginal Affairs Minister, Bernard Valcourt be already informed about the concerns of the people covered under his portfolio?" you've got to remember he's the third person to have it this year, and only then for the last month. Valcourt also said that he wants to tell these young people what the government plans on doing for them, which if the budget tabled last week is any indication it means that a couple of the youths can look forward to being hired as reservation police and busting the illegal cigarette trade wide open.
Now obviously when the transfer of pandas was scheduled, the Prime Minister Office had no idea that there would be such a thing as the Nishiyuu Walk let alone that it would come to an end on the same day. But there was, and it did. And some of those kids did damage severe enough to their feet to demand medical attention in the process. One would think that would at least garner some kind of statement from the PMO, a remark on the achievement at the very least. But in the Harper playbook you don't compliment the enemy, or at least someone who isn't your friend to put that in less harsh tones.
Of course, the politics around issues concerning our First Nations are complicated, but a photo op with cute pandas is not, especially when they were given the first class treatment on their Fed Ex flight from China to Canada. And perhaps that is just another lesson in regards to the priorities of this government: status over substance.
Posted by Adam A. Donaldson at 8:30 PM