Cracks in the Caucus? 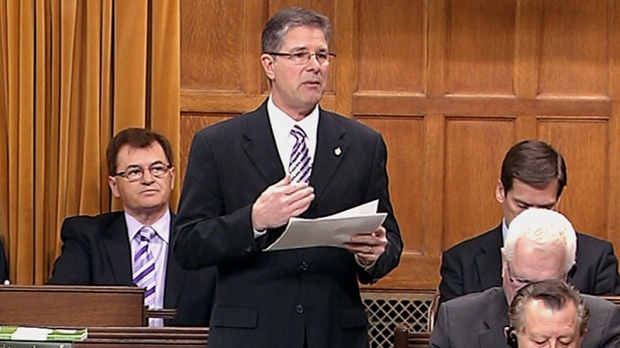 One of the incredible successes of the Conservative government is its whip, it's ability to get the members of it's caucus to tow the party line and present a united front from the Prime Minister's Office on down. For seven years, the governments of Stephen Harper have presented a united front, one message under the PMO, with liberty and speaking rights to all who get clearance from a Harper underling before hand. But what happens when the someone says no more?
We may find out in the not-to-distant future. Yesterday, Mark Warawa, the Conservative MP for Langley, BC, stood up in the House of Commons and asked the Speaker to rule on what he called a breach of his parliamentary privileges. Meaning he couldn't stand up in the House and say what he liked. And before you can say it's about abortion, let me tell you, it's about abortion.
If Warawa's name is familiar, you may recognize him as the MP who wanted a non-binding vote in the House condemning abortions based on sex selection. The motion never made it out of subcommittee, and Warawa believes that's directed from the PMO as Harper has promised not to reopen the abortion debate, despite letting a motion about commissioning a study about when life begins by Conservative MP Stephen Woodworth (Kitchener Centre) come to floor last fall.
“We need to have those rights to be ensured that we have the opportunity to properly represent our communities,” Warawa told the House yesterday, and he's found some rather broad support from fellow Conservatives in the process.
“I have had my rights taken away when it comes to representing my constituents on certain topics and I just do not think that is appropriate,” Leon Benoit, Conservative MP for Vegreville-Wainwright, AB added after Warawa spoke.
“Frankly, you guys (the media) don’t pay attention to all the ones that are spit out by the PMO at the end of the day anyway, so I don’t understand why we just can’t run through the order alphabetically the way it should be,” added Brad Trost, the MP for Saskatoon—Humboldt. “SO-31s should be the prerogative of the member. It’s just sort of bizarre why they just don’t live and let live.”
But is it more than just venting frustration for these MPs to speak out now. Don't be so sure, sources inside the party told the National Post that several MPs, about 20, met Monday night to talk about how they plan to respond to Warawa's perceived muzzling.
“The decision made by our own committee members, following orders from the highest office in the country, serves to euthanize any remaining principles of the Reform Party in our caucus, if we as members allow it to stand,” said one Conservative, who spoke to the Post on the condition of anonymity.
"Euthanize" is kind of a strong word, and one that opens another can of social issue worms. But what's more damning are the potential consequences to the party if this revolt festers. It maybe much ado about nothing and a natural and expected uproar of party dissatisfaction, but if you have as many as 20 MPs in a room talking about how mad they are at the way the party's being run, that's an issue for the man at the top of the ticket to take seriously, and Harper's always been a guy to put the united front first.
To wit, the Prime Minister's stand on abortion. More importantly his stand on voting on abortion issues in the House of Commons. The Woodworth motion last fall was a small concession to the social conservative wing of the party; more than half the caucus voted in favour of the motion, Harper did not. Harper, as shrewd a politician as there's ever been, knows that his majority walks a fine line, the people that like his fiscal policy may not necessarily be in favour of a more stringent social one. Think of the numerous ridings in the Greater Toronto Area and Southwestern Ontario, which gave Harper his majority in 2011.
This maybe a Sophie's Choice moment for the Prime Minister, does he let the more conservative voices in his party have their say, or does he keep them quiet and risk a revolt in order to keep his big tent of centrism? It maybe a worst case scenario that all 20 members involved in Monday's meeting would walk and sit as independents, but consider that with 166 seats, and barely 32 per cent support in a recent poll, the Conservatives are vulnerable. If 12 people walk then the majority becomes a minority, or if social conservatives think Harper doesn't represent them they may sit out the next election (owing to the fact that the "united right" is the only mainstream option for right-wing voters).
It's too early to tell what, if anything, might come out of this "rebellion," but with two years till the next election, it's not a good sign for the normally uniformed front of the Conservative caucus.
Posted by Adam A. Donaldson at 7:50 AM