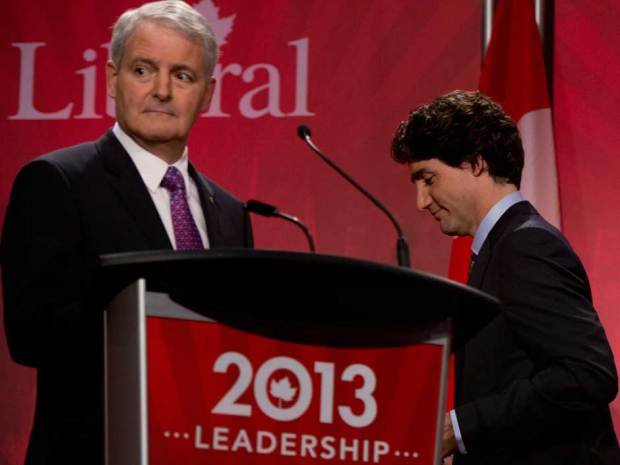 A bit of a shocker today coming from the race for Liberal leadership with the withdrawal of Marc Garneau, former astronaut, MP for Westmount-Ville-Mari, and Justin Trudeau's nearest competition in the race.
Garneau basically conceded the race to Trudeau, saying that his own internal polling showed that there was no way he could beat the race's frontrunner. “It is time now for the party to move forward together and together we can shape a better future for the country and the party,” he told reporters. “I will be a loyal soldier and I intend to be around for a very long time.”
As he explained to reporters, Garneau says his team’s polling of about 6,000 Liberal members showed Trudeau with a near unanimous 72 per cent support. Garneau, meanwhile, had secured only 15 per cent support, followed by Joyce Murray with 7.4 per cent and Martha Hall Findlay at 5.2 per cent.
Throughout his campaign, Garneau's been hitting hard against Trudeau on the basis of his inexperience, and lack of policy specifics. While Garneau tiptoed around those issues at today's press conference, he did say that his opponent has “risen to the occasion.” Garneau repeatedly said he was ready to “move on” from the race and “work for the party and the new leader in whatever capacity they choose.”
The new Liberal leader will be announced on April 14 at a party convention in Ottawa. As part of changes made to the selection process, non-Liberals will be able to vote in a non-supporter category. Part of that maybe the reason why Garneau is taking his leave of the race with reports saying that Trudeau's campaign has signed up about 170,000 supporters.
“I cannot see the numbers changing because he has an overwhelming lead,” Garneau added. “In time, five weeks from now in fact, it will be time for all of us Liberals to dedicate ourselves to the real task ahead, and that is building a true Liberal alternative to Stephen Harper.”
As for Trudeau, in keeping with the spirit of the new media, thanked Garneau on Twitter. “Thank you @MarcGarneau for your support and for a lifetime of service to Canadians,” Trudeau tweeted. “Lots of work still to do, together! #cdnpoli.”
Seven candidates remain in the race: Trudeau, Murray, Hall Findlay, lawyers David Bertschi and Deborah Coyne, former Liberal MP Martin Cauchon, and Karen McCrimmon.
Posted by Adam A. Donaldson at 10:57 PM