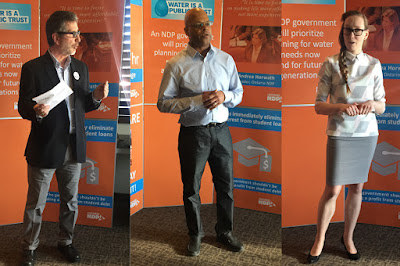 With so much at stake in the coming provincial election, the local NDP riding association hosted a markedly laid back affair at the 50 West Restaurant in the Delta Hotel Sunday afternoon to introduce members to the three contenders vying for their party's nomination.


Not an official campaign event, Sunday afternoon's gathering was meant as a way for local NDP members to meet and greet with the three proposed nominees: Mike Foley, Andrew Boscombe, and Agnieszka (Aggie) Mlynarz. Each candidate had a turn to introduce themselves, but before that, their fellow NDP members heard from the last provincial candidate for Guelph, Ward 2 Councillor James Gordon.
"It’s a thrill to see where this riding association is getting to, and the quality of the candidates that have stepped forward, which makes me feel good about standing back," said Gordon.
So what about those candidates? This is the 2018 yearbook for the NDP nominees for Guelph.
Mike Foley
Bio: Foley was born into a Francophone home in Quebec, graduated from Dawson College in 1980 and has been living in Guelph since 1991. He currently directs an eco-charity to recycle home goods and resell them which provides scholarships to students and community groups. He has worked to erase poverty by co-founding food banks and assisting child breakfast programs. More here.
Quote: "I was exposed to years of grinding poverty [as a child]. That’s become my social mirror and my drive to try to fix things that need to be fixed."
Issue: Water. "I want to emphatically say to the companies that have a free ride with our resources, 'Keep your hands off our water,'" Foley said.
More from the candidate: Click here.
Andrew Boscombe
Bio: Bascombe currently serves as the Human Rights Rep, AWOC Rep, and Head Trustee at the Con Cast Pipe local. In that time, he has worked with committee members and management to create a positive and productive culture of the workplace. He received the Pete McGarvey Scholarship Award from Humber College in the Radio Broadcasting Program as the person who best represents humanitarianism for the betterment of all.
Quote: "I’m the quiet guy in the room that listens, I speak deliberately but guardedly with understanding that the things that we say affect more than just us."
Issue: Making government work harder. "We already pay enough taxes to our government for the things were supposed to have, but all I’ve heard from government is about revenue tools and stretch goals," Boscombe said.
More from the candidate: Click here.
Agnieszka (Aggie) Mlynarz
Bio: Mlynarz was born in southern Germany shortly after the fall of the Berlin Wall. Her parents met during the 1980s through a student union involved in the Solidarity movement started by the Polish Trade Union. As a result, she grew up in a household conscious of the need for progressive policy to ensure a healthy democracy. As a graduate student, she wrote her thesis on gender politics in Canadian film from the 70s until today.
Quote: "I know that even though I'm an immigrant, I'm also a settler and this is the only party that will work towards Reconciliation."
Issue: Access for everyone. "Allowing public services to crumble, or suffer deep cuts, is unacceptable while breading a culture of scarcity. I am a New Democrat because I know there are members of this community that have been impacted by these deep cuts more than myself."
More from the candidate: Click here.
There's no word yet on when the NDP riding association will be holding their nomination meeting, but they're telling their members to stay tuned for news soon.
Posted by Adam A. Donaldson at 8:30 AM