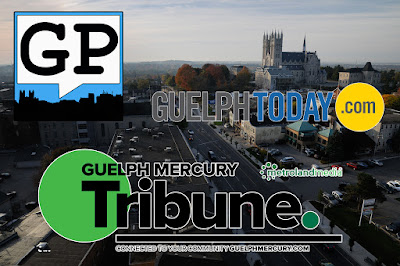 Before we wrap up 2017, let's review the year that was at city council. That's 12 months of decisions and debates on all matters of local governance from big items like merging hydro, to smaller items like approving sign bylaw variances. To take this one on, I needed a team. A group of people that observe city hall as closely as I do. Let's assemble Guelph's Crooked Media.


For this final edition of the podcast for 2017, we are joined by Tony Saxon of Guelph Today, and Graeme McNaughton of the Guelph Mercury-Tribune. They are the city hall reporters for their respective publications, so I thought they would be fitting year end guests and invited them to bring their expertise on to the show this week as we discussed some the various intrigues that happened around the horseshoe this year.
Among those issues, obviously, is the recently approved Guelph Hydro merger with Alectra and the recently approved 2018 budget. The three of us also discuss the nature of covering city council, our issues with closed meetings, whether we - the media elite - are doing a good enough job covering city hall, what we look forward to in the coming double-election year, and what people might expect. It's a fast and furious podcast this week to keep you informed and entertained during this busy holiday season.
So let's catch up with the "enemies of the people" in the midst of a much needed holiday break on this week's Guelph Politicast.


You can follow Tony Saxon's work every day on GuelphToday.com, or follow him on Twitter @SaxonontheStorm, and you can follow Graeme McNaughton twice a week in the Guelph Mercury Tribune, or online here, and on social media @iamgmcnaughton.
The theme music for the Guelph Politicast is from the KPM Klassics collection by Syd Dale.
The host for the Guelph Politicast is Podbean. Find more episodes of the Politicast here.
Remember that the Politicast Podbean channel is also the host for podcast versions of Open Sources Guelph. The previous Thursday's episode of Open Sources will be posted on Mondays.
Posted by Adam A. Donaldson at 12:00 PM