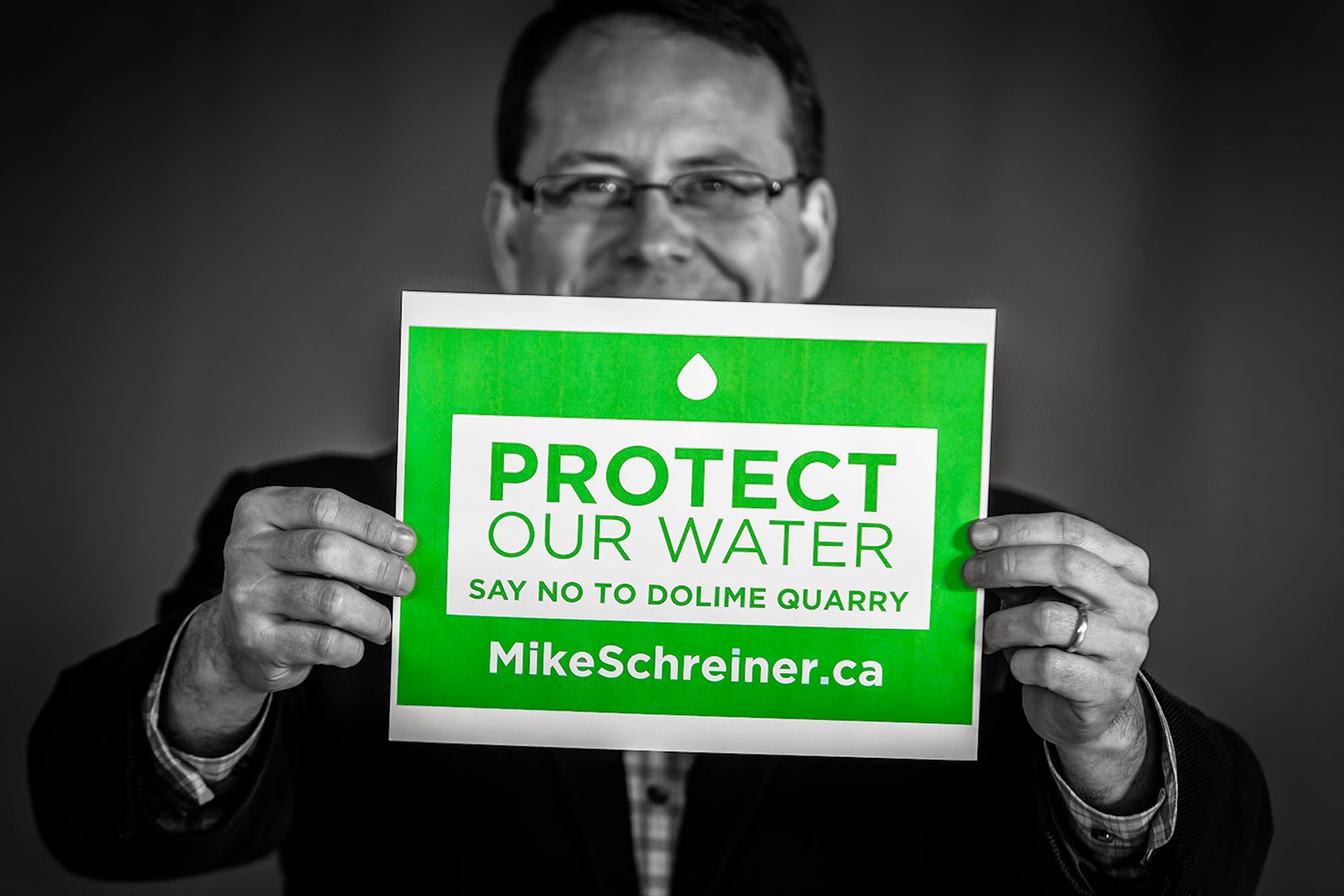 It didn't come up much in last spring's provincial election, but the struggle between the City of the Guelph, the Ontario Ministry of the Environment and private concerns over the Dolime Quarry is still very much a concern. Mediation is currently underway, and is scheduled to continue next month, but after two years there's still no sign of progress in resolving the matter permanently. Now Green Party leader and presumptive provincial Green candidate Mike Schreiner has issued an open letter to the Ministry to appeal for the city and environmental protection.
Here's the open letter:

Queen's Park - Green Party of Ontario leader Mike Schreiner sent the following letter to the Hon. Glen Murray in regards to the government's need to protect Guelph's water from the Dolime Quarry.

Two years ago today the City of Guelph took action to protect our water supply.

On February 11, 2013 the City filed an application for a Leave to Appeal the amended Permit to Take Water (PTTW) for River Valley Development’s (RVD) quarry, known in Guelph as the Dolime Quarry.

One year ago today in an unusual show of cross party cooperation all four of the major party candidates in the provincial election came together to support Guelph’s efforts to protect our water.

Due to the quarry’s blasting into the aquitard--the protective layer covering the aquifer--a fissure posing a potential threat of contamination to our groundwater source was discovered in 2006. In October of 2011 the City presented your Ministry with compelling evidence that activities at the Dolime Quarry threaten both the quality and quantity of Guelph’s water supply. After the Walkerton tragedy, The Province acknowledged that the removal of aggregates made sources of drinking water more vulnerable to contamination. Yet, your government continues to allow these activities at the Dolime Quarry, which is located near 25% of the City’s water sources.

The City has asked for four conditions which would protect Guelph’s source water:

1. Water pumping at the quarry to be limited to the “current historic average pumping rate”
2. A comprehensive long-term management plan for the quarry that protects Guelph’s water
3. An effective monitoring program
4. Financial assurances and legally enforceable requirements to ensure the quarry owner – rather than Guelph ratepayers – pays for long-term mitigation costs related to the quarry’s operation.

These are reasonable and prudent conditions. We’ve collected over 2000 signatures on a petition, which I have shared with the Ministry before, supporting the City’s conditions.

In addition to asking you to address the specific threat to Guelph's drinking water from the Dolime Quarry, I would like to work with the MOECC to resolve four important issues that arise from the operations at the Dolime Quarry and are applicable to other pits and quarries in source water regions:
Minister, I appreciate your consideration of my concerns regarding the threat posed to the quality and quantity of Guelph’s water supply by the activities at the Dolime Quarry.

Based on your public comments and our meetings, I know you care about clean water. This is the time to set the bar high and showcase Dolime as an example of how The Province can act to protect source water regions. Citizens and municipal governments should not have to waste time and money fighting their own provincial government to ensure their water is protected.

I look forward to celebrating an announcement from your Ministry that Guelph’s water is protected and that stronger protections for source water regions are on the way.