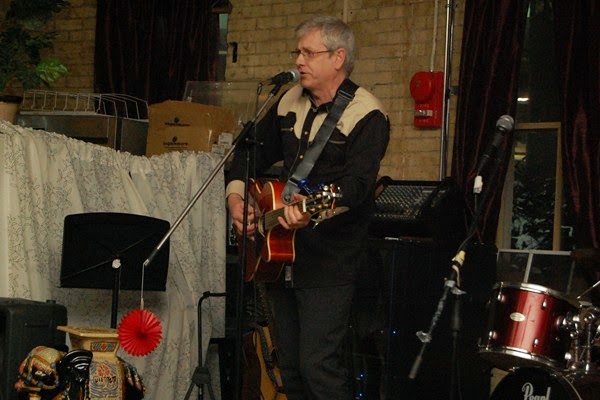 It was a bitterly cold night outside, but inside the Bullring at the University of Guelph, a small crowd of loyal New Democratic Party members stayed warm with good food, good music and more than a hint of partisan politics. Timmins-James Bay Member of Parliament Charlie Angus came to town with guitar in hand, but he also came to get Guelph riled up for this fall's (or sooner) Federal Election campaign.
"I need you to get off your rear-ends, get your neighbours off their rear-ends, we got to go and take our country back," Angus said between songs.
"Highway 401 is going to be one of the key battlegrounds in this election and what we've got to do is we're going to be going up against the most vicious, nastiest campaign that this country has ever seen, and we can't get thrown off by it. We have to stay focused and encourage people."
One of the people encouraged to get involved is Andrew Seagram, an employee with the Upper Grand District School Board and one of the organizers of the Guelph Comedy Festival. Seagram  has put his name forward for the NDP candidate nomination here in Guelph and attended last night's fundraiser. On his Facebook page, Seagram says that he's concerned about "Ending homelessness, hunger, desperation and war," and finding a way, "back to diplomacy and the blue helmets of peacekeeping."
***Full Disclosure: I was once on the Ed Video Board of Directors with Seagram. He stepped down about four years ago, I still am a member of that board, and Ed Video is one of the sponsors of the Comedy Festival.
Diplomacy was not on the record Sunday night at the Bullring though. "These sons of bitches got hold of this country by a mere 5,000 votes across 15 ridings that was it," Angus said. "So the next time someone tells you voting doesn't make a difference, get their name and say that 'Stephen Harper will send you a dozen roses on election day if you keep that up.'
"We have to get people to believe that they can win this thing," he added.
I got the chance to interview Angus before the concert began, and you'll be able to hear that for yourself this Thursday on Open Sources Guelph with me and Scotty Hertz, at 5 pm on CFRU 93.3 fm or cfru.ca.
Posted by Adam A. Donaldson at 10:18 AM