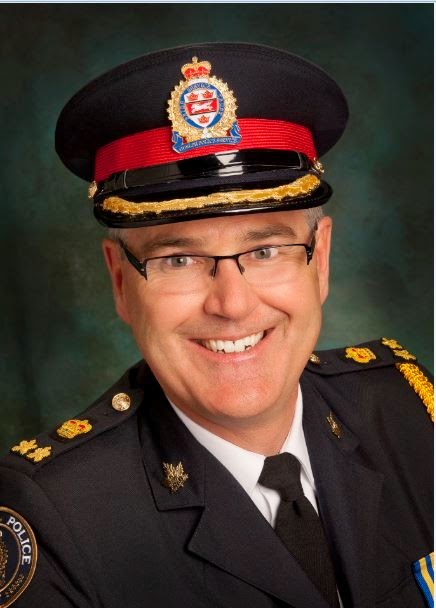 The Guelph Police Services Board is pleased to announce the appointment of Acting Chief of Police, Jeffrey DeRuyter, to the rank of Chief of Police effective March 1, 2015.

Chief of Police designate DeRuyter commenced his policing career as a Police Constable with the Guelph Police Service (GPS) in 1984. During his tenure with the GPS, he has held a number of progressively responsible positions including leadership responsibilities in Neighbourhood Services, Investigative Support Services, and Professional Standards.

On August 31, 2014, the Guelph Police Services Board appointed Deputy Chief DeRuyter to the rank of Acting Chief of Police, to temporarily take over the position from Chief Bryan Larkin, who accepted the position of Chief of Police at Waterloo Regional Police Service. During the past six months, the Board conducted a thorough evaluative process of his skills, concluding with a formal interview.

“Over the last 31 years, Police Chief designate DeRuyter has consistently demonstrated the ability to lead with integrity while building strong relationships within the Service and with community partners and citizens. “The Board is confident that Jeff will continue to advance the long-term vision of the Board to ensure Guelph remains one of the safest communities in Canada,” said Judy Sorbara, Chair of the Police Services Board.

Chief designate DeRuyter is an active member of the Ontario Association of Chiefs of Police (OACP), the Board of the Guelph Neighbourhood Support Coalition, Guelph Enterprise, and Immigrant Services Project Wisdom. He has previously been involved as a community volunteer with Guelph Soccer Club, Woodland Christian High School, and past Board member of the Citizens Concerned with Crimes Against Children, and strong supporter of the Canadian Blood Services and Special Olympics Torch Run.

Jeff is a graduate of Mohawk College and is a long-time resident of Guelph with his wife, Connie. They are the proud parents of two adult children, Andrew and Erin.

The Police Services Board has been actively engaged in succession planning to ensure the highest quality of executive command and will commence the process of selecting a Deputy Chief shortly.

The Guelph Police Service is the 15th largest municipal police service in Ontario with 278 members with a net operating budget of $37.5 million. The Service is responsible for the delivery of policing services to the more than 130,000 citizens of the City of Guelph and is built on the values of Pride, Service and Trust.