The Mitt Hits the Fan 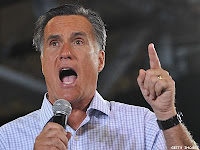