Sona Gets a Bygones From Elections Canada 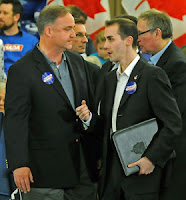 Michael Sona, a Conservative Party staffer and communications director for the Guelph campaign of Marty Burke last Federal Election, was the first to be thrown under the bus when the robocall scandal broke last March. But it seems that the indictment in the court of public opinion might may been a bit premature.
Today's news is that Elections Canada investigator Al Mathews seems to have misquoted Burke campaign volunteer Matthew McBain, who you'll remember was asked about Sona's possible involvement in the robocalls when another staffer said he directed Sona to McBain when he asked about “looking about doing some stuff that might not be okay."
McBain had responded that he had thought that Sona was interested in doing something more akin to prank calling, than a widespread effort to disenfranchise Guelph voters, but to clarify, Matthews said that a report he released unintentionally implied that Sona was talking to McBain about the latter and not the former.
“In an earlier (sworn affidavit) I wrote that Sona called McBain ‘about a campaign of disinformation such as making a misleading poll-moving call,’” Mathews wrote in a footnote on page 30 of the 36-page document. “On checking I realize that in both interviews Mr. McBain … did not recall Sona as relating the call to ‘disinformation’ or about a ‘misleading poll moving call,’ only that he wanted to set up an autodial call that would not track back to the Burke campaign.”
The news reports I read made it clear that McBain was talking about robocalls generally, and not robocalls with a capital F-R-A-U-D, but one must appreciate his candor and openness about his investigation.
Does this let Sona out of the woods? Not yet. Although it's being reporting that the investigation is drawing a close connection between those who go the robocall in question and people identified as non-Tory supporters in the party’s Constituency Information Management System (CIMS). You'll also remember that five Burke staffers - Trent Blanchette, Chris Crawford, Ken Morgan, Andrew Prescott and John White - have already been attached to accessing CIMS from the IP address that was also used by the mysterious Pierre Poutine.
The Guelph Mercury tried to reach Sona for comment, but on the advice of his lawyer, Sona declined.
Posted by Adam A. Donaldson at 7:49 PM

Sona violated a polling booth and has yet to be charged for that, but then, Harpercons rarely face justice.