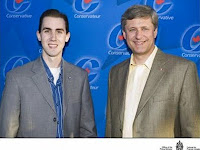 It took nearly a week, but Michael Sona is finally talking about the robocall scandal that either got him fired or forced to resign from his job as an assistant to a Toronto-area MP. Of course, completely in keeping with Sona-style, the silence was broken in the form of a brief statement e-mailed to CTV News. This is the complete statement below:
I wish to address the allegations and accusations levelled against me in the media over the last six days. I have remained silent to this point with the hope that the real guilty party would be apprehended. The rumours continue to swirl, and media are now involving my family, so I feel that it is imperative that I respond.
I had no involvement in the fraudulent phone calls, which also targeted our supporters as can be attested to by our local campaign team and phone records. On Thursday, I offered my resignation to my employer. The role of a staffer is to assist their employer in their responsibilities, and that was impossible to accomplish with the media continually repeating these rumours. It is for that reason and that reason alone that I resigned from my position.
Michael Sona
It's a good thing most police forces don't offer the Michael Sona Course in Crime-Solving: keep your mouth shut and the guilty parties will feel so bad for your silence, they'll just surrender themselves. Actually, I believe your silence was what prompted the media involving your family (and me) in the first place, because if you just left a forwarding number then...
Anyway, and in all seriousness, I'd like to take a moment and offer Michael Sona some friendly advice. Come out from behind the electronic statements and talk to us. If you truly had no involvement in robocall-gate, and I do believe in innocent until proven guilty, then it's in your best interest to share everything, and anything you know. Get out in front of this, and be open and honest and share what you know. Horrible stuff grows in darkness and you being MIA from the national debate casts a long shadow.
Throw yourself on the court of Lisa Laflamme or Peter Mansbridge. You don't think they'd give you the time of day? Are you kidding? If you told the CBC you'd only be interviewed by Alligator Al from Mr. Dressup, they'd find a way to make it happen! Better still do the Rick Mercer show. After all, American politicians on the cusp of a permanent screw-up do Saturday Night Live and all is (mostly) forgiven.
The point is that e-mail statements are so 2011. And if you learned nothing else from working on the Marty Burke campaign last year, its that the media don't stop because you say so. And they don't go away if you stick your fingers in your ears and hum really loud.
Posted by Adam A. Donaldson at 5:45 PM

Hi Adam
Great posts lately on Robofraud.
Regarding Mr Sona I am of two minds.
One, he was sent to Guelph for the 2011 election with express instructions from THE CAMPAIGN to make Burke STFU vis a vis the Fantino strategy in Vaughan.
OR. He was sent to Guelph to do ANYTHING to win Guelph since the CPC was/are wetting their pants to turn the riding BLUE.
Well we all know how the campaign worked out. So whichever was his prime directive he failed....spectacularly.
Deserved to be under-the-bus... so to speak.
Except. Burke was a weak candidate from the get-go and who in there right mind at THE CAMPAIGN could expect this inexperienced young man to do the silk purse thing. Short of anything underhanded or illegal of course.
Anyway we can only hope EC and the RCMP can sort this out. Everyone has immense faith in there two organizations.
Meanwhile keep up the good work. I think your efforts last spring played an important role in helping Guelph voters make the correct decision (now confirmed).
Mr Poutine should be worried with AD on the file