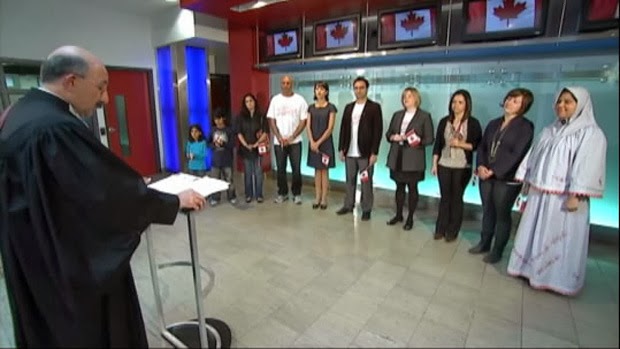 When Norm MacDonald used to host "Weekend Update" on Saturday Night Live he would always begin by saying, "Here is the fake news." Of course, a lot of the news he talked about wasn't fake, rather just skewered or being skewered, going for the punchline or an obligatory Frank Stallone reference. Well maybe tagging what is and is not "fake news" is something that Sun TV should look into. The embattled news channel, sometimes referred to as "Fox News North" has gone where even it's U.S. cousin has had the good taste not to go: staging the news.
The story broke in the last couple of days that a citizenship ceremony held at Sun TV's Toronto studio last fall was actually, predominately, made up of government workers from the office of Immigration Minister Jason Kenney. The hosts introduced the segment, and an actual citizenship judge named Aris Babikian got the 10 people gathered there - only three of who were new citizens, six others confirmed as MOI employees - to actually perform a re-affirmation oath of citizenship.
The Canadian Press uncovered the facts behind this little drama by procuring documents via the access-to-information legislation, and to paraphrase the old saying, patriotic television has a million parents, but scandal is an orphan. After initially refusing to admit complicity, Kenney apologized for the snafu yesterday in front of Parliament. "I became aware that in a reaffirmation ceremony last year following logistical problems that the situation was poorly handled," Kenney said in the House of Commons. "I regret that, but that in no way should undermine the importance and value of special reaffirmation ceremonies which we encourage all Canadians to participate in."
Meanwhile, Sun News host Pat Bolland is saying that this is all (Sun TV) news to him telling Kenney spokeswoman Candice Malcolm on air that, "It would seem that both of us have a little egg on our face." Kind of an understatement for a news organization being discovered creating a story. But how did all this come about?
Apparently, it was innocent enough. Kenney's office wanted to do something special of Canada's Citizenship Week last October, and someone suggested a televised Oath of Citizenship ceremony. The minister's office gave Sun News a list of 13 ceremonies taking in Ontario, but there some concern on the MOI's end because Sun wanted to limit their coverage to the Oath itself, and none of the ancillary speeches and events around it. So then someone at the network had a brilliant idea. "Let's do it. We can fake the Oath," reads an e-mail from a @sunmedia.ca e-mail address, the name of the sender blacked out in the documents obtained by Canadian Press.
The rest of the story goes that the MOI tried to recruit volunteers to take the re-affirmation oath in front of a TV audience. Over 3,000 were invited, 10 managed to be booked, but only three made it to the Sun News studios the day of. The show though, as they say, must go on. "In the end, we had three new citizens attend -- I anticipated that it would be a low turn-out after doing follow-up calls yesterday, so I asked six CIC (Citizenship and Immigration) employees to come to the ceremony so that we'd have the right numbers," wrote one senior communications adviser.
In an interesting aside, the CBC broadcast a one-hour long, in-studio, citizenship ceremony the day after featuring 75 new Canadians, a studio audience, a bagpiper, a retired Mountie in his red serge and local dignitaries. CBC had planned the whole thing months in advanced, which begs the question: if CBC were already doing it, why was it so important to Kenney's office to get Sun News to put on the same event?
It's a fascinating conundrum of issues at play here. A scandal that could sink a news outlet, the outright fabrication of a news event and collusion with the government to create it to boot, just as Sun News continue to jockey for position on the regular cable dial next to CBC and CTV news networks. We also have the CBC, which currently sits threatened with budget cuts in the next couple of months, beating Sun to the punch, while Sun, a private business, gets all the support from the minister's office it can handle. Ultimately, the subject matter in regards to the offense itself is harmless, I mean no one was hurt, but what about when it really counts? How an you trust Sun News when they literally bent over backwards to do the government a favour? Not exactly the best rep to build a news network on.
Posted by Adam A. Donaldson at 11:29 AM