What's Wrong With This Picture...? 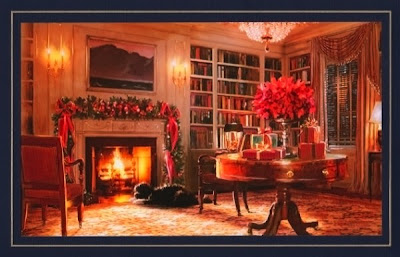 If you said that, for a Christmas card, it doesn't highlight traditions like "family, faith and freedom," then you just might be Sarah Palin.
The former Alaskan Governor and Republican Vice-Presidential candidate, apparently in desperate need of some attention this holiday season, decided to pick on the First Family's choice of Christmas card cover art. Talking on Fox News radio, which seems to be the last place still open to Palin and her thoughtless meanderings, the polarizing politician said that everyday Americans prefer "American foundational values illustrated and displayed on Christmas cards and on a Christmas tree." This card though, she added, "It's just a different way of thinking coming out of the White House."
Good thing then that this tradition of the simple, secular Christmas card is a new phenomenon. Just look at all these cards. Of course, the Governor didn't outline what would constitute a proper representation of "family, faith and freedom" on a Christmas card, not that you really expect her to because this incident, like so many others, are about Barack Obama being black trying to find any little, ridiculous excuse to hide his opponents' overt racism behind.
So whether you're ultra-religious or super-secular, Merry Christmas to all and best wishes for the New Year.
Posted by Adam A. Donaldson at 11:07 PM