We Need to Talk About the Republican Party

You'll notice the inference that Obama's liberal agenda is pushing open acceptance of homosexuality, while putting good, pious religious people in the closet. There's also a further inference that if Obama isn't Christian, then what is he?, which comes from the same school of buffoonery that gave us that birther nonsense. Least of all, Perry comes off as seriously homophobic, and this comes just a month after the controversy involving a hunting cabin that the Perry family used to rent called "N***erhead."
It also doesn't help that Perry's tied with Bachmann for number and frequency of gaffs, up to and including his 53 second search for the third government agency he'd get rid if he were elected President. It's no coincidence that Perry started taking a dip in the polls the minute he started debating, which suggests that like the Democrats, Republicans at least want a Presidential nominee who can speak in complete sentences. With Gingrich up in the polls, Perry's lost the one, surefire constituency he should have had secured, but in a bizarre way, Perry's entry on the national stage has a lot of people thinking fondly about the intellectual prowess of George W. Bush.
Former Governor Mitt Romney

If the Democratic National Committee runs that ad, or ones like it a couple of million more times then that's it for Mitt. If John Kerry was a flip-flopper in 2004, then I'm not sure what term best suits Romney because he doesn't just change his position with the revelation of new information, like Kerry's stance on the Iraq War, but he goes to its fundamental opposite like bring pro-choice as Massachusetts' Governor to now being pro-life.
Since the moment he's entered the race, Romney's been the presumptive nominee, yet, for some reason, he's been unable to "seal the deal" with Republican voters, who have been grasping for someone, anyone, from Donald Trump to Chris Christie, to take up the cause. He's got fundraising, endorsements, and an accomplished resume in the public and private sectors on his side, but he still can't make a convincing case for himself. And in the meantime, Romney is attacked by the other Republican challengers for his new found hard right stance on social issues, the healthcare plan he championed in Massachusetts and even for being too intellectual for having a 59-point tax plan (as opposed to, say, Herman Cain's 9-9-9 plan).
So what can Romney do? I think most Republicans know that deep down, of the candidates available, he stands the best chance of winning in the general election. But make no mistake, he's got baggage. As a businessman he did more job cutting than job creating, there's still some bizarre aversion to the election of a Mormon amongst a large percentage of Americans, and then there are the accusations of ideological pandering. On the other hand, as many have pointed out, Romney does look like the B-movie interpretation of what a U.S. President should look like. Or worse, like one of these guys: 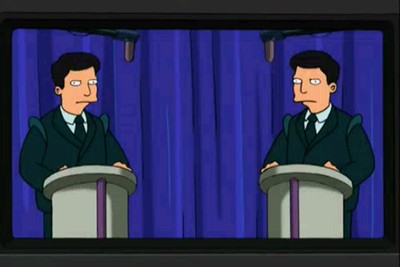 Former Senator Rick Santorum
Which brings us to the man that Sarah Palin praised for his "ideological consistency," but then again Cookie Monster is fairly ideologically consistent too. Santorum may be the red right hand of social conservatism in American politics, but that really hasn't done him any favours in this race. Santorum routinely finishes in polls around Paul and Huntsman territory, and now he's betting all his chips on the caucuses in Iowa, hoping to get enough juice in that first contest to keep him going through the next several primaries.
Although perhaps known more for having a name synonymous with a gay sex act, and unsuccessfully petitioning Google to remove all records of it from their search engines, Santorum really has nothing new to offer in terms of policy ideas or positions on key issues. In this election cycle, he famously was the first to attack a question offered by a gay service member by video at a September debate saying, "any type of sexual activity has absolutely no place in the military....And the fact that they're making a point to include it as a provision within the military that we are going to recognize a group of people and give them a special privilege to – and removing 'Don't Ask, Don't Tell,' I think tries to inject social policy into the military. And the military's job is to do one thing, and that is to defend our country." Interestingly though, a month earlier, Santorum, at another debate, used Iran's persecution of gay people as a justification for U.S.-backed intervention in the area.
Former Godfather's Pizza CEO Herman Cain
Until last weekend, Cain was not only leading a successful campaign for President, but he had also enjoyed the longest stretch as frontrunner of any candidate in the race so far. If Cain's unprecedented success as a presidential candidate is the political story of the year, then his equally great fall must take second place. After accusations of sexual misconduct surfaced, Cain continued to enjoy support, but when a woman came forward claiming a 13-year affair with the businessman, it was all too much and his campaign was suspended as of last Saturday. It begs the question, Republicans support Cain when alleged to have committed sexual assault, but his extramarital affair was too much to handle...?
If anything, the rise and fall of Herman Cain either proved or disproved the virtue of the politically inexperienced candidate. His 9-9-9 plan was easily criticized as overly simplistic, suggesting that no bill from the Cain White House would be longer than three pages smacked of anti-intellectualism, and his foreign policy opinions are shockingly misinformed. Worse still, the entire package of the Cain philosophy was wrapped up in a kind of pride as the campaign praised itself for being anti-establishment, and Republican supporters eagerly played the race card in Cain's defense. (Anne Coulter's "Our Blacks are better than their Blacks" comment comes to mind.)
Of course, Cain's campaign for now is merely suspended, but that's political spin for "We're giving up, we just don't want to make it sound like we're giving up." Leaving the race on the words of a quote from the Pokemon movie, Cain perhaps painted the perfect analogy for this Republican race, a cartoon presuming itself capable of making a serious philosophical statement. But really it's about collecting strange little creatures living in their own bubbles, and waiting for their turn to get attention and be played in the game. Because when it comes to the electoral college, you've got to catch 'em all!
Posted by Adam A. Donaldson at 5:52 PM