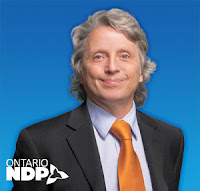 'Tis not so much the season for political announcements, but in a fundraising e-mail today, James Gordon tells local NDP supporters that he'll be running again in the next provincial election.
"With a minority government, we are never sure when the election will be, but I will be running to win; I want to be your MPP," writes Gordon. "To do this, I’m setting an ambitious but achievable fundraising goal to match the PCs and Liberals dollar for dollar. This campaign, we proved we could do it, and over the coming months, I’d like to show that we can make change for the better in Guelph."
Gordon isn't the first candidate from the recently concluded Provincial election to declare his desire to run in the next election. After the campaign wrapped in a minority government for Dalton McGuinty, Progressive Conservative candidate Greg Schirk said that it was his intention to run again as well.
The optics look good for Gordon, who added over 4,200 votes to the NDP's count, and came within 800 votes of tying Schirk for second place.
"For the first time, we were able to close in on the PCs and Liberals," the e-mail continues. "While voter turnout was at an all time low, creating challenges for all the parties, the NDP was the only party to increase its number of votes. [P]eople are hungry for our approach: a positive, practical and progressive way of doing things."
Posted by Adam A. Donaldson at 5:39 PM

Hi Adam
Strange juxtaposition in L'il Jimmy putting out his kettle for donations at this time of the year.
While most would attribute his increased vote count as a somewhat morbid nod to the orange wave, many are lamenting his role in the Farbridge (8 vs 5)tyranny at city hall
While Jimmy (and Andrea) are apparently favouring and planning/ scheming for an early provincial election (which no one wants), I hear that the local provincial Liberals are carting bags and bags of goods to the Chalmer's effort to make Christmas a little more joyous for the disadvantaged in Guelph.
Gives new meaning to the concept that actions speak louder than words.

Either James and Andrea are really bad schemers (for which the last election would indicate otherwise) or that is self-contradictory. If no one wants the election, then they would punish the opposition for forcing one. In which case, James and Andrea would not be scheming for an election.