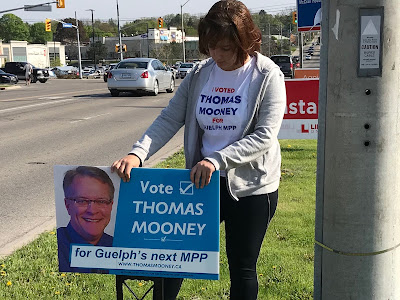 Thomas Mooney has found himself embroiled in more party politics, which is kind of the opposite of his message, as he has parted ways from the Alliance Party of Ontario after the provincial party has seemed to cut ties with five of its Electoral District Associations (EDA), including Guelph.


"This morning, I received notification from my local association president that two executives within the Ontario Alliance Party, Joshua Eriksen and CFO Richard Naranowicz, have taken it upon themselves to seek to dissolve all the Riding Associations registered with Elections Ontario, without notice," Mooney said in a press release.
"Unfortunately, it appears, and I believe it to be true, that these two executives chose to violate the very constitution that attracted me, and appear to be doing everything within their power to scuttle the success of the party," he added. "The why and what for, I can only speculate. But I have no interest in speculation, only truth."
Mooney's tweet also included a screen capture of an email from Naranowicz to Elections Ontario that the Alliance was voluntarily deregistering the Guelph EDA along with Aurora-Oak Ridges-Richmond Hill, Glengarry-Prescott-Russell, Carleton, Cambridge and Oxford. The reason why is unknown, and the Alliance did not respond to even the Guelph Mercury-Tribune's request for comment.
The Twitter feed for the Guelph EDA has been renamed "Thomas Mooney Campaign", where it was announced Friday that Mooney will be running for the Ontario Party. On the Elections Ontario website, the Ontario Party lists Jay Tysick as the leader, while Eriksen is listed as the leader of the Ontario Alliance. Incidental confusion may occur because Tysick still lists himself on his Twitter page as the "Interim Leader of the Ontario Alliance."


Great news #Guelph!@ON_ThomasMooney has teamed up with the #OntarioParty, the party that will support him in better representing you, the voter. The #Ontario Party is comprised of independent candidates from across the province that share the same sight for local representation
— THOMAS MOONEY CAMPAIGN (@PartyGuelph) May 18, 2018

We began with a vision of a party with integrity and a commitment to real representation and respect for the people of this province and we never wavered. Despite roadblocks and sabotage and challenges, we stayed true and have emerged on the other side stronger.
— Jay Tysick (@carletonjtysick) May 17, 2018


No matter who he's running for, Mooney will likely stay focused on the idea that we need more representative government in Ontario, and less party politics. As he told Politico last month, "Right now, what we have is a top down, authoritarian-type government. It doesn't matter who gets in there, it's all about party whips, and telling your local representative, 'This is what you can say, and this is what you can't say.' That's a dictatorship."
We'll try and shed some light on this when Mooney appears on Open Sources Guelph this Thursday at 5 pm on CFRU.
Posted by Adam A. Donaldson at 5:23 PM