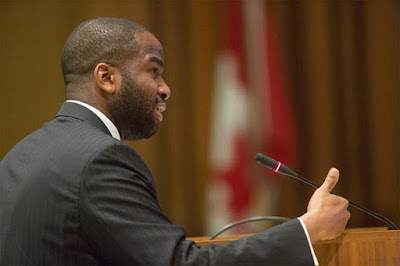 Guelph's provincial candidates will get together again on Tuesday to face-off in another debate. Well, four of them are. The four major party candidates will be grilled before a live audience, and a TV one, and the one doing the grilling is Kithio Mwanzia, the President and CEO of the Guelph Chamber of Commerce. Today though, he's the one being grilled.


As part of Guelph Politico's election coverage, going beyond the platforms and attack ads, we sit down for this week's bonus podcast with Mwanzia, who will be hosting his second Guelph election debate this coming week when he moderates the Guelph Chamber's Provincial Election Candidates Debate.
Now this debate will be different from the one last week hosted by the Guelph Wellington Coalition for Social Justice in that only the four major party candidates will take part. For the four candidates excluded, this is a miscarriage of democracy, but to Mwanzia it's an uncomfortable necessity in order to allow more time to go deeper on the issues, and hash out the Guelph effects and influences. We get into this first thing on the podcast.
Mostly though, for people that have ever wondered about the challenges and responsibilities of moderating a debate, this is the podcast you've always wanted. We dig into Mwanzia's mind on the process: Where he’s going to put the emphasis on his questions, how much he’s digging into the policy binders for each party, and his thinking about the format and how this debate might be different from the last. Also, why does the Chamber of Commerce have a debate anyway?
So let's question the questionner on this week's bonus edition of the Guelph Politicast!


The Chamber of Commerce debate takes place on Tuesday May 22 from 6 to 8 pm in the Council Chambers of Guelph City Hall. Doors open at 5:30 pm, and the debate will be broadcast live on Rogers Channel 20. For more information on the debate, you can visit the Chamber website here.
The theme music for the Guelph Politicast is from the KPM Klassics collection by Syd Dale.
The host for the Guelph Politicast is Podbean. Find more episodes of the Politicast here.
Remember that the Politicast Podbean channel is also the host for podcast versions of Open Sources Guelph. The previous Thursday's episode of Open Sources will be posted on Mondays.
Posted by Adam A. Donaldson at 10:30 AM