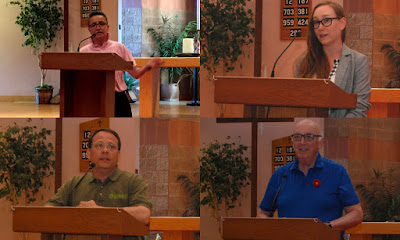 Normally, Tuesdays at Three Willows Church in the summer means a dinner from the bounty of local food trucks, but this Tuesday it was local politics on the menu. The four major party candidates squeezed another event into a busy week of appearances to do a little Q&A with area residents.


John Lawson, Minister of Worship & Pastoral Care at Three Willows, played moderator. Each candidate got 15 minutes total, including up to 10 minutes to pitch their election to voters and at least five minutes of questions and answers from the over 40 people in attendance. Lawson called it "speed dating", and was replicating a similar format Three Willows used for the 2015 Federal Election.
So what did we learn?
Liberal Sly Castaldi covered many of the her parties main campaign promises before answering a couple of questions. Asked about the Liberal approach on protecting water, Castaldi reiterated the present government moved to put a moratorium on new water taking permits, creating stricter guidelines, and increasing the water taking fees. She also said that a Liberal government will work with the industry to make sure plastic water bottles are made of up to 85 per cent recycled material.
In a response to a question about education, Castaldi said that the Liberals have increased the education budget every year they've been in power. "We will continue to invest in education, that’s a commitment," she said.
Castaldi finished by expressing her gratitude to everyone that's taken part in the campaign regardless of party. "I've learned a great deal through this process, and that it's the people who matter the most," she said. "It’s a privilege to serve communities and I’m grateful to all the volunteers that serve on these campaigns. I owe you all a debt of gratitude."
NDP candidate Aggie Mlynarz got some of the tougher questions of the evening, including a question about what NDP leader Andrea Horwath means when she says she'll tax the rich. Who does Horwath consider rich? Mlynarz said that it means raising the corporate tax rate to 28 per cent over a three year period on businesses with a $3 million payroll or more.
Someone else asked Mlynarz if Horwath's proposal to make Ontario a "sanctuary province" will put pressure on social services, and she had a very personal response. "I was born as a refugee in what’s characterized as a 'sanctuary city', and the best system is to have an open system, because if you don't you create a system where people distrust the government and don’t seek help when they need it," she said.
On housing, Mlynarz said that the NDP will add 20,000 units of social housing and 30,000 new units of supportive housing for those struggle with addiction and mental health issues. She also said that an NDP government will ensure safe housing for Ontario's First Nations residents and will "send the bill to Justin Trudeau!"
Presumptive front runner Mike Schreiner was asked about the proposed Xinyi glass manufacturing plant in Guelph-Eramosa, a controversial development because of its environmental implications. Schreiner said he was concerned because of the potential effect on air quality and the discharge of warm water into our cool rivers and streams, which would have an effect on fish spawning. "I haven’t reached a position, but I have some serious concerns that have to be remedied before any plans are approved," Schreiner said.
When asked about mental health issues, Schreiner said he had met someone downtown that finally heard after eight months that service was available for him, and he was on suicide watch too. "It’s unacceptable that 12,000 kids are on the waiting list and that people of all ages have trouble accessing services," Schreiner said. "Addictions and mental health should be treated as a health issue, and mental health should be part of OHIP and covered under OHIP, and [the Greens are] going to put a down payment on that."
Also asked about water bottles, Schreiner said that the Green Party is the only political party looking to recreate a deposit system for returning plastics, and will support innovative industries like a Sarnia company that's experimenting with the creation of corn-based plastics versus the present polymer-based plastics.
But if there's a candidate that made the most news, it was PC candidate Ray Ferraro.
Ferraro was asked if he had any regrets about Christine Elliott losing the PC leadership, after he praised a candidate retreat she led in London a few weeks ago. "Yes," he said. "As a matter of fact, when they came to me to run I thought they were crazy, it looked like a comedy of errors," Ferraro added describing the leadership convention.
Ferraro did his part blaming "Mr. Brown and his lieutenant" for changing PC bylaws, "parachuting" candidates into ridings, and misplacing funding, but the party has owned up to those mistakes. Having said that, "I was embarrassed to say the least," Ferraro added.
He also made a strong pitch for independent authority in a future PC caucus saying that his main focus will be making sure Guelph gets its fair share of provincial funding. "I'm going to put my energies into running for Guelph and if my party doesn’t like it, we’ll talk," Ferraro said. "I'm really looking to work for Guelph, and I will always be amendable if you have a problem."
The one question of the night on debt also went to Ferraro, who pondered, "What is a billion dollars, can you put it in your pocket?"
"When you hear those figures it's not sustainable," Ferraro explained, and while he said that the first year of Tory budget might need need to run a deficit, the point of this election should be that there are a lot of promises being made, and "nobody knows how they’re going to pay for them."
For Ferraro, the answer was simple: attract more industry to Guelph. We just have to get the government out of our way. "The problem with Guelph is that the province gets a lot of inquiries and Guelph hasn’t got one in 10 years," he said. "We’ll run our own city!"
Posted by Adam A. Donaldson at 8:32 PM