Is this Why Phil Meagher Was Fired? 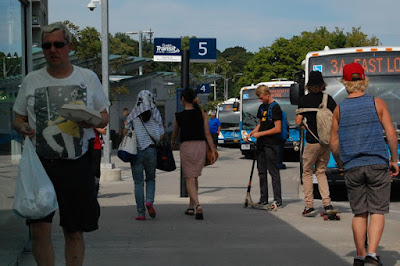 It was about a week ago that the City of Guelph quietly fired Transit General Manager Phil Meagher. No reason was given to the public about why such a key person in senior staff was removed, especially before the annual budget process was about to begin, but does the agenda for the upcoming Committee-of-the-Whole meeting offer an insight into why?
As you're likely aware, the City is planning to implement a Business/Service Review Framework to try and find inefficiencies in City spending, and they're beginning with three departments. Check out number three:

From the agenda itself:

Transit is a public facing service that provides transportation services to an average of 6.9 million riders annually. This review will examine all processes involved in providing this service. The pilot review will look at alternative service delivery methods as well as improvements to the effectiveness and efficiency of the service. The review will include all critical functions of Transit including; scheduling, planning, administration, resources and service delivery. Benchmark comparisons to other municipalities and identification of leading practices, to assess potential opportunities will also be part of this review and along with public and stakeholder engagement information will be integral to this review.

Here's what the Service Review will look at:
Of course, no one would argue that efficiency shouldn't be looked for in Transit, or any City department for that matter, but is it possible that these three departments were chosen for political reasons? No issues with Boulevard Maintenance have been reported, but problems with Solid Waste Services in terms of cost overruns and revenue goals not met have been well documented. So have issues around overtime, for which Transit has taken the lion's share of overtime payouts.
Motives are one thing, but the other might be timing. According to the staff report, the review of Transit won't even begin until the third quarter of 2017, and it won't be complete until the second quarter of 2018. Hence the reason why the Transit Growth Strategy isn't in the previously released Capital Budget, or Capital Budget forecast. Obviously you're not going to implement a transit updates and improvements (and along with it, new spending) while the whole department is being reviewed for cost savings and efficiencies. Meagher was one of the driving forces behind the Growth Strategy, which was deferred from the 2016 budget during council deliberations.
It's unlikely that the City will ever reveal the reasons why Meagher was fired, but as I noted in the previous post, it's not hard to imagine that the now-former Transit manager felt a little besieged by developments outside his control the last couple of years. We'll chalk this latest news up to being the straw that broke the camel's back.
Guelph Politico will have a full preview of the November 7 Committee-of-the-Whole meeting shortly...
Posted by Adam A. Donaldson at 6:13 PM

Maybe file a freedom of information request with the city?