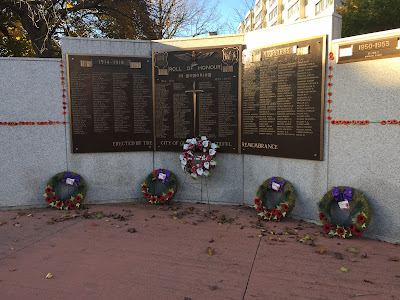 Every November 11, wreaths are laid and poppies are left at the Cenotaph at the corner of Woolwich and Eramosa. On this corner, in the centre of town, there's a wall of names memorializing those Guelphites that fought and died in the two World Wars and the Korean War, but how often does the average Guelphite in 2016 read those names? How often do we think about those lives lost, or who those people even were when they died in the killing fields of Europe and Asia?


Well Ed Butts is someone that started thinking about those people, and more than that, he decided to dig into who they were, and what their lives were like before they died and ended up memorialized forever on the Cenotaph. Butts is a local historian and author, and he went to the Guelph Mercury with an idea for a column series: let's look at the names on the Cenotaph and profile them. Who were they? What were their lives like before they went to war? Who did they leave behind?
Despite the end of the Mercury, Butts has continued his research into the names on the Cenotaph, and has even found a few mistakes along the way. On the Cenotaph there are names that are misspelled, names that are missing, and as his research efforts continued the family members and decedents of those on the wall have contributed to that effort in unexpected ways. On this week's Politicast, I pretty much give it over to Butts and some of his greatest hits of the people who went to war and died for us, yet we barely know anything about them.
Learning about those we remember every Remembrance Day is the topic of discussion on this week's Guelph Politicast.