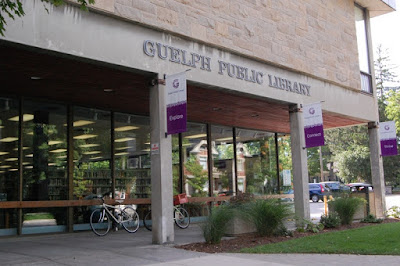 Every week, the City of Guelph and other groups send out notices to announce new events, imperatives, and information that you need to know. Here is this week in press releases.


What Do You Want in a Library? That's the question that the Guelph Public Library wants you to answer as they explore new ways to connect and thrive in our community. What do you need to do? Take a five minute survey at this link before October 24, or fill one out in person at your local library branch. "The Guelph Public Library thanks you in advance for taking the time to share your opinions and looks forward to sharing the library’s story of economic and social impact with you and your families later this fall!" said the library's release.
Mayor's Got Mental Health Day Event on His Mind. Mayor Cam Guthrie is inviting members of the community to take part in the 17th Annual Mayor's Event to Mark World Mental Health Day. On October 13 at City Hall from 1 to 2:30 pm, Guthrie will host Rick and Heather Osborne. Rick found himself in jail at the age of 21 thanks to the one/two bad choice punch of gangs and drug addiction, but he turned his life around and began working with at-risk youth. His wife Heather meanwhile has 22 years of experience teaching youth and adults in prisons and hospitals, and provides educational support for people with experiences of addiction, anxiety, depression, Fetal Alcohol Syndrome, and other special needs. For more information on the event, click here.
Celebrate 40 More Years of Ed Video. Although the actual anniversary was technically back in June, Ed Video Media Arts Centre (for which I am - MEDIA BIAS ALERT - a member of the Board of Directors) is marking 40 years with a celebration and symposium. The celebration takes place at ANAF at 32 Gordon St on Friday September 30 at 9 pm featuring musical performances by The Dogs, Clara Engel, audio and video art by David J. Knight, and live video projections from the archive. The symposium takes place all day Saturday at Ed Video at 404 York Rd and will feature presentations by Toronto-based video and performance artist Maya Ben David, experimental film turned experimental video game maker Thirza Cuthand, the multi-talented comedy and viral video impresario Nick DenBoer, and Marshall McLuhan's grandson Andrew. There will also be a demonstration and workshop for Google's new VR endeavour Google Cardboard. All events are free or PWYC. Check out the Ed Video website for full times and details.
Construction Work Begins Soon on Baker St. Lot. Just an FYI, but if you're going to be trying to park in the Baker St lot starting on September 26, you might have a bad time. Construction work will be taking place for one week on the Chapel Ln and Baker St entrances/exits to the lot in an effort to allow for smoother comings and goings by commuters. Phase two of the construction will be the removal of the attendant booth, which should take about two weeks weather permitting. The Baker lot will be accessible from Park Ln during the duration of construction. For more information, click here.
An Open House About Building Bridges. The City of Guelph is looking for community input on the future of the Norwich Street bridge, and on the construction of two new cycling and pedestrian bridges over the Speed River in the area of Macdonell and Arthur streets. Two open houses will discuss the projects on Wednesday September 21 at 2 pm and 7 pm. The fate of the Norwich bridge, which has been closed to traffic since 2004, will be up for discussion, as will the possibility of the construction of two new bridges over the Speed River south of the Guelph Junction Railway tracks from Macdonell to Huron streets to accommodate increased pedestrian and cycling traffic. For more information on the City's plans, click here.
Bring Your Tweed, and Your Bike! The Guelph Hiking Club is inviting everyone to get dressed in their finest tweed, and hop on their bike for the first ever Fall Tweed Ride in the City of Guelph. What is a Tweed Ride? "Tweed Rides are a worldwide sensation, which started in London in the fall of 2009. The organizers thought that it would be fun to have a slower-paced 'cosmopolitan ride with a bit of style.' So they dressed in tweeds and rode their bikes through London streets. Now Tweed Rides exist from Tokyo to Finland!" Guelph's ride will take place on Saturday, October 1 from 1 to 3 pm and cover a seven kilometre bike ride from the Arboretum through University Village to Royal River Trail and the finish line at Royal City Brewery. Admission is free and their are prizes for the best dressed male and female as well as most outlandish costume. For more information, please contact sgates14@hotmail.com or activeguelph@gmail.com.
Posted by Adam A. Donaldson at 3:19 PM