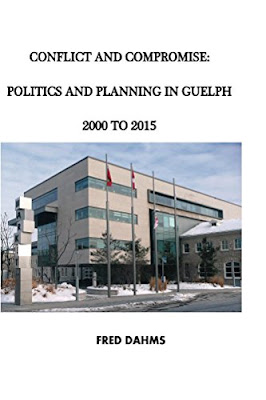 Political books are nothing new, but a book about Guelph politics? That has the Guelph Polticast written all over it! Conflict and Compromise: Politics and Planning in Guelph 2000-2015 is the new book from Dr. Fred Dahms, and if you're looking for a good primer on how the City got from there to here on a wide variety of different issues, then you can't do much better.

Dahms is someone that knows planning. He is Professor Emeritus, founding member and former Chair of the Department of Geography at the University of Guelph and former Acting Dean of the College of Social Science. He was also a member for 11 years and Chair of Gueph's Planning Advisory Committee, which is now defunct. But the pages of his new book covers the time after he was so heavily involved in city planning, and a highly contentious time at that.
The synopsis of the book:

Between 2000 and 2016, Guelph has grown by about 20,000 people. During that period, many decisions have been made by city staff and council on how to guide growth in the city. A lovely aspect of democracy is being able to elect councillors whom you believe represent your idea of the ideal future. Not surprisingly, there has been a lot of debate about what the ideal future looks like.

In conversation with Dahms we talked about his background, how he decided what topics to deal with in the book, his professional insight into the various debates that have happened at council about planning over the last 16 years, the two Guelphs debate, and why he's sometimes skeptical that council can govern in the City's best interest (and he sometimes isn't).
So let's head to Dr. Dahms front porch and talk about the recent past on this week's Politicast.


Dahms will be launching Conflict and Compromise on September 27th at 7 pm at the Bookshelf eBar in conversation with former city councillor Ian Findlay, former Mayor Karen Farbridge, and urban planning Phd candidate Audrey Jamal. You can buy the book right now at the Bookshelf or from Amazon.
The theme music for the Guelph Politicast is from the KPM Klassics collection by Syd Dale.
The host for the Guelph Politicast is Podbean. Find more episodes of the Politicast here.
Remember that the Politicast Podbean channel is also the host for podcast versions of Open Sources Guelph. The previous Thursday's episode of Open Sources will be posted on Mondays.
Stay tuned for future editions of the Guelph Politicast!
Posted by Adam A. Donaldson at 5:05 PM