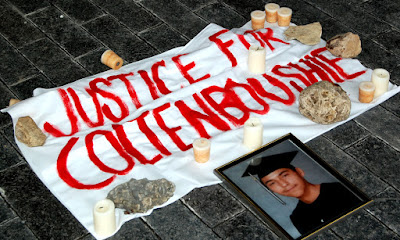 In the recently released Vital Signs report (more about that on the next Politicast), statistics revealed that 6,500 people in Guelph and Wellington County identified as First Nations. That's about three per cent of the population, which isn't huge, but is far from insignificant. We don't always see them, but our First Nations friends have certainly been making themselves heard lately.


A few weeks ago, over 150 people gathered in Market Square with serious purpose. Just one week before that, Saskatchewan farmer Gerald Stanley was found not guilty of murdering Colten Bushie. Bushie and his friends found themselves outside Stanley's farm with a flat tire and sought help; Stanley, apparently, thought they were there to rob him and retaliated with extreme force. The outrage of the crime, and the selection of an all-white jury, has been eclipsed by a national rage that First Nations people were seeing again, before their eyes, an injustice being carried out.
Of course, First Nations people in Guelph are not immune to those feelings, and those feelings were shared at City Hall on Saturday February 17. As noted above, Politico and other media outlets covered this demonstration as it happened, but there are things that an article can't give you: the nuance of how the words are delivered, the sometimes raw emotion, and the reaction from those there listening. In other words, there's a context beyond cherry picked a few choice words and phrases, and this is what Politico and the Politicast are built to do.
This week on the podcast, we turn the microphone over to about half-a-dozen speakers who let their feelings about Bushie, Stanley, and this country's history of mistreatment of First Nations people be known. There was anger, there was sadness, there was disappointment, but there was also some hope. It was unlikely that this would be the last time people would gather like this; the end, sadly, is no where in sight. On the other hand, getting together 150 people, Indigenous and settler alike, on a cold February day and say in unity that "enough is enough" is victory enough on its own.
So let's head back in time to listen to the voices of our First Nations community on this week's Guelph Politicast.


Since this was recorded, another demonstration was organized to protest the acquittal of Raymond Cormier, who was charged in the death of Tina Fontaine, a young First Nations woman that was found murdered in the Red River two weeks after she went missing on the August long weekend in 2014. I guess we will see if the trend of injustice against Indigenous people will force future demonstrations.
The theme music for the Guelph Politicast is from the KPM Klassics collection by Syd Dale.
The host for the Guelph Politicast is Podbean. Find more episodes of the Politicast here.
Remember that the Politicast Podbean channel is also the host for podcast versions of Open Sources Guelph. The previous Thursday's episode of Open Sources will be posted on Mondays.
Posted by Adam A. Donaldson at 9:30 AM