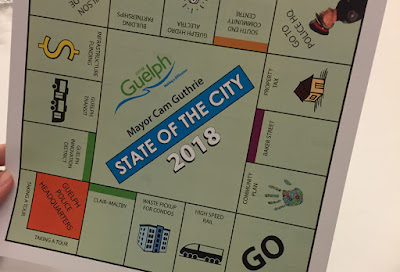 Shall we play a game? Mayor Cam Guthrie thought it was a good idea last Friday when he revealed his annual State of the City address in the form of a Monopoly-style board game in order to tout a year, and indeed a term, of many accomplishments. It may have been persuasive for the crowd in attendance, but can you be persuaded?


As always, the State of the City address is an event by the Guelph Chamber of Commerce. In other words, it's a business event, and in business you always want to put your best face forward. So last Friday at the Delta Hotel and Conference Centre, Mayor Guthrie put a face forward that showed an incredibly successful Guelph with some challenges, but mostly just an overwhelming number of successes. To put it another way, Guelph has been made great again.
This greatness comes in many forms. The construction of the Guelph Police Headquarters is on time and on budget! Guelph is on the map for high speed rail! The Wilson Street parkade will add parking to Downtown Guelph for the first time in 35 years! Infrastructure funding! South End Community Centre design! Hydro merger! Guelph Transit... Well, we're working on it. But still, Guelph Innovation District! And so on, and so forth.
So let's head to the Delta and have breakfast with the mayor, and other people, on this week's Guelph Politicast!


You can read the Politico coverage of the State of the City here. And you can find a link to the video of the State of the City at the Mayor's own blog here.
The theme music for the Guelph Politicast is from the KPM Klassics collection by Syd Dale.
The host for the Guelph Politicast is Podbean. Find more episodes of the Politicast here.
Remember that the Politicast Podbean channel is also the host for podcast versions of Open Sources Guelph. The previous Thursday's episode of Open Sources will be posted on Mondays.
Posted by Adam A. Donaldson at 12:00 PM