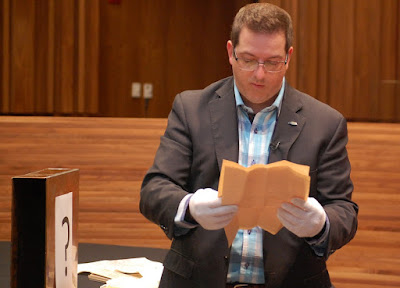 You don't normally get dozens of people at a Committee-of-the-Whole meeting, let alone an hour before hand, but that's the power of the time capsule. Discovered by construction crews working on the renovations of the Victoria Road Recreation Centre, city staff, with the help of Mayor Cam Guthrie and members of council, opened the capsule today and reclaimed the treasures buried in 1974.
You can watch each discovery as it happened in the video below, but from 43 years in the past we received newspapers, recreation booklets, a map of the City of Guelph, various pictures and postcards, a letter to the year "?" from then Mayor Norm Jary, and the copy edited article announcing the opening of the Victoria Road Recreation Centre from the newsroom of the Guelph Mercury. Check out what all was discovered from the capsule in the video below.


Heather Flaherty, the general manager of parks and recreation, added that a new time capsule will be put together for the re-opening of the Vic Road Rec Centre next month. Stay tuned for details.
Posted by Adam A. Donaldson at 10:23 PM