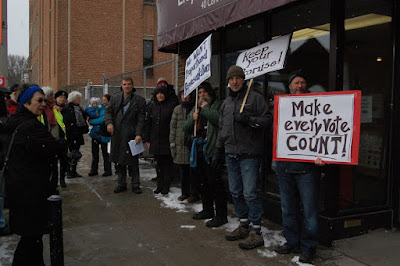 On Friday morning, Fair Vote Canada demonstrated in front of the constituency office of Lloyd Longfield on Cork St. ahead of a meeting the the Member of Parliament for Guelph. According to organizers, a meeting with Longfield last month was positive, but the MP didn't think that Guelph cared enough to make the issue a priority. Fair Vote begged to differ.


Fair Vote arrived at the meeting armed with the results of a local survey they did with Interactive Voter Communications and Strategic Directions, and the data does make a dramatic point that Guelphites care deeply about the issue. The survey results seemed to back up Fair Vote's point of view, particularly amongst decided voters, the vast majority of whom agreed that electoral reform is a major issue that local voters want the Trudeau government to take action on.
Specifically, people were asked four questions. When asked if the first-past-the-post system, where a party gets 100 per cent of the power with 39 per cent of the vote, was a concern, nearly 62 per cent of all respondents said yes. Out of decided voters, the number went even higher with nearly 78 per cent of people saying the FPTP was a concern.
As to whether or not Justin Trudeau should keep his campaign promise to make 2015 the last with FPTP, barely half of all respondents said he should, while nearly 70 per cent of decided voters agreed.
More impressively, 3 out of 5 people asked in the survey are of the opinion that seats in Parliament should be distributed according to the percentage of the vote that party received; 4 out of 5 decided voters agree with that also, just as more than 82 per cent of decided voters think the parliamentary committee on electoral reform's recommendation to implement a form of PR that maintains some aspects of the current system of representation should proceed. Only 55 per cent of the total respondents agreed.
The survey was conducted over two days earlier this week with 1,530 randomly selected respondents. Strategic Directions noted that the high rate of unsure responses, which depending on the questions ranged from 21 to 33 per cent, was inline with the 28.7 per cent of Guelphites who didn't vote in the 2015 Federal Election. Results are considered accurate within plus or minus 3 per cent 19 times out of ten. The full results are below.
1) In our First-Past-the-Post electoral system, a single party can get 100 per cent of the power with only 39 per cent of the vote - a false majority government. Does that concern you?
Decided Voters: Yes = 77.9%, No = 22.1%
Totals: Yes = 61.6%, No = 17.5%, Unsure 20.8%
2) Justin Trudeau promised 2015 would be the last First-Past-the-Post election. Is this a promise you believe the Liberal government should keep?
Decided Voters: Yes = 69.3%, No = 30.7%
Totals: Yes = 50.4%, No = 22.3%, Unsure 27.3%
3) Do you think we should adapt a system of proportional representation in which the number of seat a Party wins in Parliament has a closer kink to the percentage of the vote they receive?
Decided Voters: Yes = 80.3%, No = 19.7%
Totals: Yes = 61%, No = 14.9%, Unsure 24.1%
4) The electoral reform parliamentary committee recommended adopting a system which maintains the connection between citizens and a local Mp while increasing proportionality. Do you agree with this recommendation?
Decided Voters: Yes = 82.6%, No = 17.4%
Totals: Yes = 55.4%, No = 11.7%, Unsure 32.9%
Posted by Adam A. Donaldson at 9:55 AM

It really does come down to the questions you ask in the survey, doesn't it?