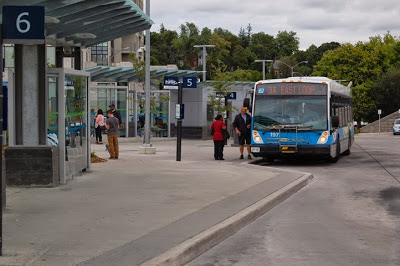 The good news for transit users is that some relief will come next week with extra buses being added to routes that are routinely behind schedule. The bad news is consideration of the following question: Just what the heck has the City been doing so far as Transit's management, and why did it end up taking two whole months to fix the problem created when council voted to cut peak service for the summer last December?
Regular readers are aware of my struggle to get answers about routine incidents where the 10 Imperial bus idles at the West End Rec Centre for two to three minutes, often when the bus is already behind schedule. Missed connections were frequent, and rider frustration, including my own, increased. Initially, I heard a driver tell a bus full of people that management had told him that the buses had to save mileage in order to save money. In a conversation I had with Transit Manager Phil Meagher, he said that explanation made no sense and that the incident shouldn't have happened. But it kept happening...
After two more official complaints on my part to Transit, it seemed the situation had been resolved, that Transit was good as its word and that the situation was being addressed. Then, last week riding the 10, we idled at the Rec Centre once more, and got downtown seven minutes late. I, and another passenger, asked for an explanation. The driver said that he was following this schedule he was given, and the one prompting him on the bus' computerized schedule. According to his time table, he was right on time, which offered a conundrum: why are the drivers following one schedule, and users following another?
The driver showed me the green sheet with his route schedule upon it, and sure enough, his bus arrived ahead of his schedule at Guelph Central Station, which was 5:52 pm. All the other buses departed the station at 5:45. On top of it all, though I needed the 4 York Road bus, which the 10 turns into after completing its run, I would have to wait until 6:15, which would mean I would be late to the Board meeting I was trying to get to.
When the same thing happened again this past Monday, I wanted an explanation. Why was Transit posting schedules all over town and on the City's website that they were purposefully telling their drivers not to follow? It begins with the fact that many of us, including myself, have apparently been misreading the schedules. Departure times are different depending on the time of day during the weekday schedule, which is weird given the fact that the bus are departing from Guelph Central Station, at the same time, twice an hour. From the schedule posted at the West End Rec Centre. 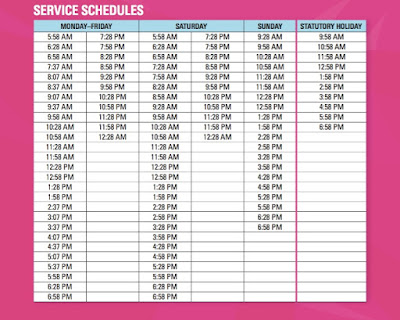 According to a supervisor I talked to Monday, the drivers were given schedules that were a kind of hybrid of the 30-minute and 40-minute schedules. While the times were correctly posted - mea culpa - there remains a situation where people were getting on the bus along with route with the expectation  that they would make it downtown in time for their connections, and that was not happening. On purpose. At no point did any driver inform the bus' passengers, until challenged, that the schedule, by design, would not be getting them downtown on time, meaning that if travelling in the usual peak time, bus riders needing transfers would have to add 30 minutes to their travel time. And it took two months to get someone to finally explain this.
"A Route Supervisor will speak with the drivers on Route 10 Waterloo [sp?] about the incorrect schedule information that was shared with you to make sure that this doesn’t happen again," Meagher wrote to me today in an email.
Meagher added that given the restrictions imposed on Transit's budget this year, this was the best they could do. "The decisions were made to meet the budget target as directed by the City, in order to lessen the overall tax impact to residents of Guelph," he wrote. "While service and frequency changes can interrupt riders, the decision was made to change transit frequency in the summer when there are fewer riders on the bus—impacting the least number of people."
That brings us to a motion brought to council to approve the $75,000 expense to add 10 extra buses to help ease the pressure on certain routes to make sure bus riders make their connections on time. At council Monday, Deputy Chief Administrative Officer of Public Services Colleen Clack called the move "a small scale way to mitigate" the "challenges" faced by residents. Not only is the challenge logistical, but it's financial. Meagher reported to council that revenue for Guelph Transit was off by 1.7 per cent for this May over last, but the total financial impact is still unknown. In the wake of that, something had to be done.
So starting Monday July 4, extra buses will be added to the 2A/B West Loop, 3B East Loop,
5A Gordon, 8 Stone Road Mall, 10 Imperial, 11 Willow West, 13 Victoria Road Recreation Centre, and those buses will be in place until the return of peak service after Labour Day weekend. Transit warns though that construction and other delays may still affect all transit routes, but hopefully disruption will be less frequent. We will see.
Posted by Adam A. Donaldson at 4:30 PM