Appeals in the Sona Case Denied, the Man Himself is Now in Jail 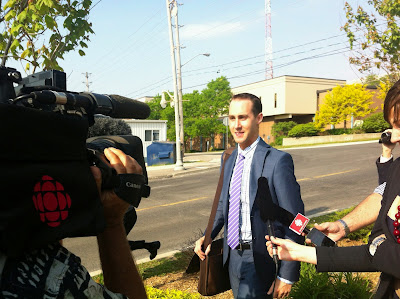 In the Ontario Court of Appeal last Wednesday, Michael Sona arrived with one of three roads in front of him, more jail, less jail or the same amount of jail he was sentence to back in November. Ultimately, the three judge panel chose door number three, but does that mean the case is over, and what about the unanswered questions that linger still?


Last Wednesday, the court heard two appeals. One from Sona asking for a reduced sentence and one from the Crown asking for a heavier one. No matter which way the decision went, Sona's jail sentence began the moment the proceeding was over. "Mr. Sona was required to surrender into custody on the night before the appeal, and did so. He is now serving that sentence," said Nicholas E. Devlin, the Crown attorney overseeing the appeal.
Although the appeal didn't go the Crown's way, Devlin can't say yet whether his office will take further action against Sona. "The Court of Appeal has not yet released its reasons, so it would be premature for the Crown to decide or comment upon any further steps," he added.
Despite the fact that Sona is now serving his sentence, the people affected by the robocall scandal in 2011 are still weary about the idea that justice has been served. "It's hard for me to answer yet because  he's the only one serving time," said Sarah Parro, she was one of a number of people who filed a victim impact statement during Sona's sentencing.
"I do feel disappointed with how it has been handled, and that it hasn't been taken as seriously as it should," Parro added. "As a voter it's unfortunate that for future elections I feel like I have to stay non-partisan to not be targeted again for another situation."
It may be several weeks before the Ontario Court of Appeal releases its decision. Sona, who was found guilty of "preventing or endeavouring to prevent an elector from voting," was sentence to nine months in prison and one year probation after the court found that he had aided and abetted the artist formally known as "Pierre Poutine" in placing over 7,000 fraudulent robocalls to Guelph voters, redirecting them to the wrong polling station.
"I don't think that it's right that he should be going through what he's going through alone because it's almost impossible for one person to commit that crime," said Parro. "And it wasn't just Guelph, there were other cities and it makes me even more upset that all of the spotlight is on this one man."
Evidence submitted in the trail showed that at the same time one suspect was buying prepaid credit cards at a Shoppers Drug Mart, another was accessing the CIMS database of electors back at the Marty Burke campaign office. But while the criminal case against Sona seems to have come to end, there are still fundamental issues left unresolved, not to mention at least one person that remains unpunished.
"I want them to know that it's not right to take those rights away from citizens. It's not right to take our freedom away," Parro said. "I get very emotional about this because when it comes to living in a free country, it's just very annoying when certain powers that be abuse the system."
Posted by Adam A. Donaldson at 9:47 PM