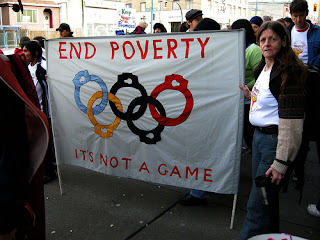 Maybe you listened to this morning's "Beyond the Ballot Box" on CFRU, and maybe you were saving it for later, but either way, I wanted to add a couple of end notes to our - rather vicious - Olympics discussion.
First up is the may from the Guelph Review I referred to. If it takes you a minute to get oriented, you're not alone. But I think it demonstrates very loudly and very clearly that the underlining of this friendly competition of games and sport is a vast security net meant to stop, in the words of the security force themselves, a "9/11 type event." One thing's for sure, I know I wouldn't want to live anywhere near where there's an Olympics happening. And here's the You Tube video for the song "Sniffing and Snorting," which was played halfway through the first hour. In the video there are some subtitles that I think are making a very important point, even if you don't necessarily agree with its (and ours) point about the possible harm of the Olympic games. It's food for thought.