I've accused recently of perhaps being bereft, to a degree, of the nominal cheeriness of the holiday season. But then I saw this tonight on a jaunt to the Red Brick Cafe downtown and thought to myself, "Well isn't this nice." I've often thought of the crane over the new and improved Gummer Building to be pretty much an eyesore, especially during those long years where nothing was being done with it. But on the other hand, it's nice that the construction crew decided to give it a bit of Christmas flare. Check it out next time you're downtown. 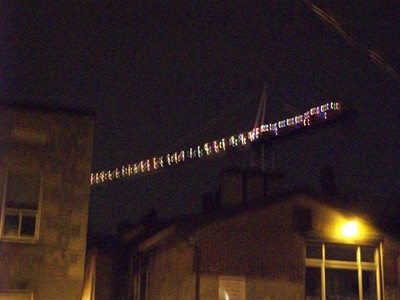