Wynne Admits She Won't Be Premier After Thursday 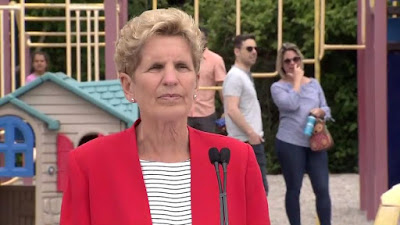 In a surprising moment, in an election filled with surprising moments, the current Premier of the Province of Ontario confessed that her days in the office are numbered, and that she's unlikely to emerge the victor of Thursday's vote. Instead, Kathleen Wynne wants you to send a minority message to the New Democrats and Progressive Conservatives.


"On June 7th voters will elect a new government. I don’t know who voters will choose but I am pretty sure that it won’t be me," Wynne said rather emotionally at a campaign event in North York.
"After Thursday, I will no longer be Ontario’s Premier. And I’m okay with that. Because, as I’ve said many times before — it’s not about me. It’s about the people of this province. It’s about their wellbeing. And their futures. It’s about their jobs. Not my job."
The most recent EKOS poll puts Liberal support in the province at 19.3 per cent, which is not the party's worst showing in this writ period, but it's close. In fact, the Liberals have not broken past 30 per cent in any of the major polls since the election began on May 9. Meanwhile, the PCs and the NDP seem to be running neck-and-neck, with the NDP leading in nearly every poll in the last week. That brings us to Wynne's next point.
"[I]t comes down to this — voters are going to pick a new premier but they are generally worried about giving that person — whether it’s Doug Ford or the NDP — too much power," Wynne explained. "They’re worried about giving them too much of a free hand because they’re concerned about what that might mean for our economy and our future."
In acknowledging defeat, Wynne made a pitch to undermine the other two major parties that might form a government by asking voters to make sure that the Liberals have the balance of power in other words.
"So, with a few days left, my message is this: a vote for the Liberal Party is a vote to keep the next government in check," she said. "A vote for the Liberal Party is your best bet to make sure that the next government is not a majority government. And that the next government is held to account to all voters."
The NDP leader wasn't buying that. "Kathleen Wynne has abandoned the fight against Doug Ford's cuts. And her request today for a minority government is a demand that she be allowed to continue to hold the power at Queen’s Park – something voters have already rejected," Andrea Horwath wrote on Twitter.
"But she is playing a dangerous game. Liberal votes won’t result in a minority – they’ll result in a Doug Ford majority. And we can’t afford Ford."
Doug Ford, meanwhile, has been conspicuously silent on Wynne's admission though he might bring it up at a rally in Ottawa later tonight.
Green Party leader Mike Schreiner, for his part, agreed with Wynne's premise, but not her plan. "She is right; an NDP or PC government needs to be held accountable," he said in a press statement. "The best way to hold the government to account is to elect Green MPPs. A progressive minority government with at least one Green MPP would be best for Ontario."
On the other hand, Schreiner was the only party leader to offer anything resembling graciousness in response to Wynne's confession this morning. “I want to thank Kathleen Wynne, who has worked hard for Ontarians for the past 5 years as Premier. I thank her for her public service."
Posted by Adam A. Donaldson at 6:53 PM