City Council Preview - What's on the Agenda for the June 11 Meeting? 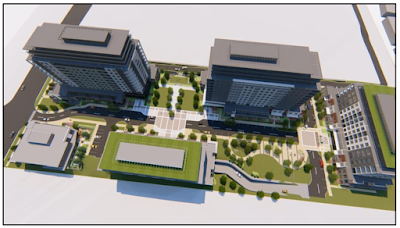 It will be a busy planning meeting this month with deadlines due for some developments, a new Official Plan amendment, and the return of a monster development in the south end.


IDE-2018-70 1888 Gordon Street Proposed Official Plan Amendment and Zoning By-Law Amendment (Files OP1701 and ZC1701) Ward 6 - We're revisiting this development that was first brought before council in April 2017, a Tricar development of nearly 500 units spread across six buildings, plus a handful of townhouses. Instead, this development is coming back to council with 540 proposed units in two 14-storey towers and two 8-storey towers, plus two standalone amenity buildings with nearly 1,500 square feet of commercial space (as seen above). Stantec Consulting is applying for a rezoning of the property from C.3-4 (Agricultural Commercial) Zone and A (Agricultural) Zone to R.4B-20 (Specialized High Density Residential) Zone, and staff is recommending that the application be approved.
IDE-2018-79 Request for an Extension of Draft Plan Approval 1023 Victoria Road South (Phase 4 of Kortright East Subdivision) File: 23T-01508 - The fourth phase of the Kortright East Subdivision was approved by council almost three years ago in July 2015. The plan called for between 128 and 157 single detached homes, 29 semi-detached units, and some open space, all fitting in nicely with the larger subdivision that began construction 13 years ago. Since the 2015 approval of Phase 4, Fusion Homes has registered its Phase 4A plan for 62 single detached lots plus open space, just to the north of the Phase 4 development. City staff see no reason not to grant the extension given the new application, and are advising council to approve the extension with conditions.
IDE-2018-80 Request for an Extension of Draft Plan Approval 0, 24, 26 and 28 Landsdown Drive – Draft Plan of Vacant Land Condominium File: 23CDM-13507 - Way back in time, about July 2015, council approved a project to build 28 new single detached homes on vacant land east of Gordon Street South. That development hasn't started yet, and they have a deadline of July 2018 to get shovels in the ground that they're not going to make. The reason for the delay is not posted in the staff report, but there's a detailed list of conditions that have to be met before construction begins. Other than that, the development now has until July 2021 to begin.
IDE-2018-83 Proposed Demolition of 34 Hooper Street, Ward 1 - The old house sitting just south of York Road will not be sitting there much longer if the developer has their way on this file. A development plan for this site has been shared with staff, likely another single-detached dwelling, but no building permit has been filed yet. In the meantime, there's still the house, and although it's listed as non-designated in the City of Guelph's Municipal Register of Cultural Heritage Properties, Heritage Guelph believes it's "not a significant cultural heritage resource." In other words, it shall be demolished with council's approval.
IDE-2018-84 Proposed Demolition of 13 Highview Place, Ward 3 - Although this single home is listed as non-designated in the City of Guelph's Municipal Register of Cultural Heritage Properties, nobody's standing in the way of a developer demolishing the home. Although there's not yet a plan filed for the property, Heritage Guelph is asking the developer to preserve certain elements, like the exterior brick and wood window sashes, and integrate them into the future development.
CA0-2018-20 Appointment of a Member of Council to the Association of Municipalities of Ontario - Council is going to nominate Ward 5 Councillor Cathy Downer to stand for re-election as a member of the Board of Directors with the Association of Municipalities of Ontario. If re-elected, Downer will serve another two-year term ending August 2020, which is probably contingent on Downer herself getting re-elected to her council seat in Guelph this October. The vote for the AMO Board takes place at their Annual General Meeting this coming August.
IDE-2018-78 132 Clair Road West Proposed Plan of Subdivision and Zoning By-Law Amendment Files: 23T-15501 and ZC1510, Ward 6 - In another blast from the past, this development, which includes a corporate business park block, a commercial block, two future development blocks and a stormwater management block, first came before council in December 2015. There were a number of council, staff and agency concerns in that application, and two years later a revised submission was ready, but the developer appealed to the Ontario Municipal Board for non-decision in accordance with the provisions of the Planning Act. The City worked with the developer on a “confidential and without prejudice” basis and this revised application is the result. This the public statutory meeting for this renewed development.
IDE-2018-71 City Initiated Official Plan Amendment for Affordable Housing Public Meeting - As expected, staff is bringing forward a proposed amendment to the Official Plan to update the portion about affordable housing to make sure there are no inconsistencies between the OP and the Affordable Housing Strategy. The amendment will include reference to affordable housing targets, and new definitions for "primary rental" and "affordable housing". This is the statutory public meeting for this item, and staff will collect any and all comments from councillors and citizens.
Posted by Adam A. Donaldson at 12:11 AM