Horwath Hopes Hattrick Does the Trick in Guelph 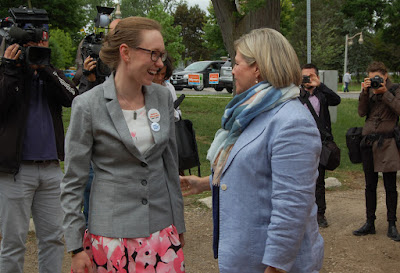 Making her third stop in Guelph in six weeks, NDP leader Andrea Horwath seems to banking a lot of faith in Guelph turning out orange on Election Day. With 48 hours to go, Horwath rallied more than 75 people behind the Boathouse on Gordon Street to make every moment count to make Aggie Mlynarz the MPP for the Royal City.

With the campaign now phrased as a two-party race, Horwath returned to Guelph with the hope that the Royal City riding might be swept up in the potential Orange Wave alluded to in some of the polls. The NDP leader said that the goal is to not checking Doug Ford's power after Election Day, but to make sure that Ford doesn't win on Election Day.
"I invite you to join us in that effort because it's going to take every single one of us to vote NDP, and make sure that Doug Ford does not form a government on Thursday," Horwath said to the cheering crowd and gathered reporters. "Here in Guelph that means a vote for Aggie because only the NDP will keep Ford out of the Premier's office."
Horwath didn't announce any new policy or endeavour, rather her goal was to encourage local NDP campaigners to maximize their efforts in the last 48 hours of campaigning.
During a media scrum after the rally, Guelph Politico asked Horwath about the one thing that might be standing in the way of an NDP victory in Guelph, Green Party leader Mike Schreiner.
A Mainstreet poll released over the weekend indicated that Schreiner's lead had increased by more than half a percentage point since the last poll was taken late last month. At the same time Mlynarz also gained in the polls by nearly half a percentage point herself. Schreiner has 32.3 per cent to Mlynarz's 28.4 per cent. PC Ray Ferraro is in third place with 25.4 per cent.
"I'm not going to presuppose the decision that people make in Guelph here on Thursday, or overall in the province frankly," Horwath said. "What I will say is that I believe that every single person that wants to make sure that Doug Ford is not the next premier of this province needs to consider voting NDP, and that's regardless of any other circumstance or how people voted in the past."
"This election really is about the future of our province and the last thing we want is Mr. Ford at the helm," she added.
Within the hour, Schreiner rebutted via emailed press release.
"These late-game scare tactics are politics as usual - stoking fear to harvest votes. I think we can do better," the Green leader said. "The people of Guelph have the right to vote for whoever they believe will serve them best."
"The NDP statement also misses the mark. Independent polls have consistently shown me in the lead. A Green vote is not a wasted vote. It is a historic vote," he added.
Posted by Adam A. Donaldson at 10:54 PM