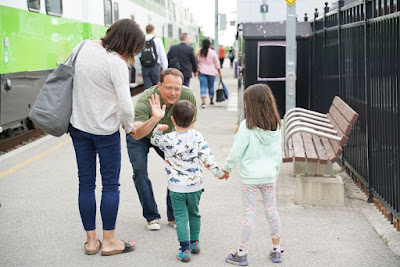 Guelph made Ontario political history last night by electing the province's first Green Party Member of Provincial Parliament. Mike Schreiner's victory came after what looked like a very tight race in the riding, but in the end, Schreiner won his seat in what can only be described as a "blow out" result for the Green Party of Ontario leader.

According to Elections Ontario results, Schreiner finished in first place with 45.04 per cent of the vote, or 29,082 ballots cast. For Schreiner, this represents a 26 per cent gain from 2014, and it represents the best margin of victory for a Guelph MPP since Brenda Elliott in 1999, who won with 52.6 per cent of the vote. He also did better than out going MPP Liz Sandals in her last election in 2014 where she won 41.5 per cent of the popular vote.
"I'm just so thankful that we had so may amazing volunteers literally deliver this through people powered change," said Schreiner on the CFRU election show last night.
"My first priority right now is being a strong champion for Guelph, and making sure that I put in place the constituency office and staff to really serve this community well to be a strong voice for Guelph at Queen's Park."
Schreiner's nearest competition was Progressive Conservative candidate Ray Ferraro, who got 21.8 per cent of the vote, or 14,084 ballots cast. The last time that a PC candidate did better it terms of the number of votes was when Elliott lost to Liz Sandals in 2003 though she received 20,735 of the ballots cast.
In 2003, that worked out to be 37.1 per cent of the vote for Elliott, but when it comes to total share of the vote in 2018 for the PCs, Ferraro ended up not moving the needle very far. In 2014, Anthony MacDonald received 20.8 per cent, in 2011 Greg Schirk received 25.6 per cent, and in 2007 Ben Senechal received 24.74 per cent. Despite the margins, those percentages only represent between 11,048 and 12,258 voters.
Meanwhile, even though there were three visits to Guelph from the party leader Andrea Horwath, NDP candidate Aggie Mlynarz still finished in third place with 13,928 ballots cast, or 21.57 per cent of the vote. Though she finished third, Mlynarz's efforts expanded NDP support past 12,000 votes for the first time since Derek Fletcher's 1990 victory, where he was sent to Queen's Park under Bob Rae with 37.9 per cent support, or just over 15,000 votes.
If there was a big loser though, it was Liberal candidate Sly Castaldi who joined a very long list of Liberal hopefuls Thursday night who had their political ambitions dashed.
In all, Castaldi won only 6,537 votes, or 10.12 per cent, which is the worst ever showing for a Liberal candidate in the riding of Guelph going back to its creation in 1987. The previous record holder was Rick Ferraro who won 11,459 votes when he lost to Elliott in 1995. It was also a disappointing defeat when looking back at Liz Sandals four elections victories when she only dipped below 20,000 total votes once in the 2011 election with 19.815. Sandals last won Guelph in 2014 with 22,014 votes.
As for the "third party" party candidates, there were some impressive showings there too starting with Paul Taylor, the None of the Above candidate secured 358 votes for a solid 0.55 per cent share of the vote. Libertarian Michael Riehl also finished strong with 297 votes, which was a better showing that Blair Smythe, who carried the Libertarian banner in Guelph in 2014 and won just 170 votes.
Thomas Mooney of the Ontario Party finished seventh with 181 votes after a rocky campaign that saw him switch parties three times before Election Day. In last place was Communist Party candidate Juanita Burnett, who lost some of her voter share from the 2014 election garnering just 109 votes versus her 2014 finish of 170.
According to Elections Ontario, 63.18 per cent of Guelph residents cast ballots in Thursday's election, which is better than province-wide turnout. In Ontario, only 58 per cent of eligible voters cast ballots.
Speaking of province-wide, Doug Ford and the Progressive Conservatives will form the next provincial government having won 76 seats thanks to 2.32 million votes, which was 40.5 per cent of the total vote.
The NDP will form the Official Opposition, now representing 40 seats in the Ontario Legislature. With over 1.9 million votes, or 33.57 per cent, there was just was a little less than 397,000 vote difference between the total PC and NDP vote, perhaps confirming the pre-vote picture of a very divided province.
Of course the Liberals, who have formed government for the last 15 years, were completely devastated. They no longer even have official party status with just seven seats won. Their share of the vote was also down from 1.86 million in 2014 to 1.12 million when the final votes were tallied. Although she won her seat, Kathleen Wynne last night that she would be stepping down as Liberal leader.
For the rest of the Green Party of Ontario, they secured nearly 264,000 votes across Ontario for 4.6 per cent of the vote. From 2014, the Green Party added 30,718 new voters, and secured one MPP. What happens next?
Stay tuned.