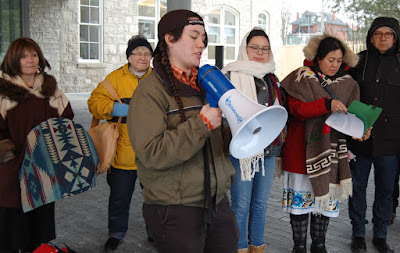 In as much as the murders of Colten Bushie and Tina Fontaine were shocking, it was somehow even more shocking when those murders went unavenged as both perpetrators were found not-guilty of second degree murder. It's enough to make you wonder why more Indigenous youth aren't angrier and more active. Well, this is a podcast about one who is.


You've probably heard of Xicotencatl Lopez. He organized two rallies back in February, one to protest the acquittal of the man that killed Bushie, and one a week later after the acquittal of the man who killed Fontaine. That's a lot to take in a one week period, and a stark reminder that our young Indigenous people are especially vulnerable.
It's also important to keep in mind that according to Statistics Canada, the Indigenous population in Canada does skewer younger. "In 2011, the median age of the Aboriginal population was 28 years, 13 years younger than the median of 41 years for the non-Aboriginal population." It seems clear that when considering the future of First Nations people in Canada, and the realization of Truth and Reconciliation, that young people should be an important voice and provide some leadership.
Enter Xico Lopez, who's not even old enough to vote yet. Lopez is a student at John F. Ross High School, and has made a part time job out of rallying and organizing. Lopez was inspired to organize and speak after the trial of Bushie's killer and found that he had something of a knack for rallying. Since then he spoke at April's Slut Walk and did some campaigning for Communist Party candidate Juanita Burnett. Remember, it's still a couple of years till he can cast a ballot.
However, Lopez *is* old enough to appear on a podcast about politics, and on this week's podcast he talks about how he got politically involved, what he thinks about the current state of nation-to-nation affairs, and how he's actually optimistic about the future. We also talk about where he's going with his protesting career, and how even when it comes to the politically active teen sometimes parents just don't understand.
So let's talk about the youth of Canada's First Nations on this week's Guelph Politicast!


Remember, June is Indigenous History Month, and that the City of Guelph will be holding its annual First Nations, Inuit and Métis Community Celebration on Thursday June 21, at 5:30 pm in Market Square.
The theme music for the Guelph Politicast is from the KPM Klassics collection by Syd Dale.
The host for the Guelph Politicast is Podbean. Find more episodes of the Politicast here.
Remember that the Politicast Podbean channel is also the host for podcast versions of Open Sources Guelph. The previous Thursday's episode of Open Sources will be posted on Mondays.
Posted by Adam A. Donaldson at 9:00 AM