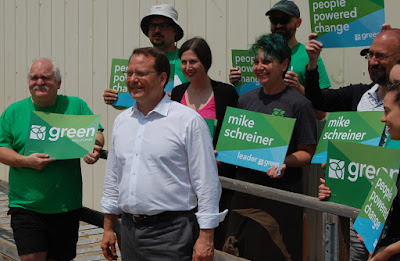 Mike Schreiner said that it was clear from Wednesday's all candidates meeting at HOPE House that not enough is being done to support people that live in poverty. So on Thursday afternoon, Schreiner played his campaign card to do more be promising to increase social assistance with a guaranteed basic income.

According to the Green Party of Ontario leader and Guelph MPP candidate, with nearly one-third of Ontarians now working in some for of precarious labour, using a Basic Income Guarantee is "the most effective and efficient way to eliminate poverty."
The Government of Ontario's been holding a Basic Income Pilot where 4,000 people in Hamilton, Brantford, Brant County, Lindsay and Thunder Bay and surrounding areas are being given benefits based on 75 per cent of the Low Income Measure (LIM). The first phase of the pilot was completed in April 2018.
For Schreiner and the Green Party, the pilot is a good start, but it's not moving the needle on poverty fast enough. So in front of the office of the West Willow Village Neighbourhood Group, Schreiner announced that the Greens was to increase social assistance rates to 75 per cent of the low-income measure in the first year, and 100 per cent within four years.
"Our social safety programs need to modernize and readjust for the world in which we live in today," he said. "Our Basic Income Guarantee is not just about eliminating poverty, which is our primary objective, but it's also about the economic health of our community because we will not be able to give everyone access to the economy unless they have basic income security."
In terms of real numbers, someone on Ontario Works receiving $711 per month will see their benefits increase to $1,800 per month after four years under the Green plan. "This will make a huge difference in people's lives," said Schreiner. "The average rent in Guelph is $1,000 per month, so how can someone possibly survive on $711 per month? It's simply impossible.
How will the Green's pay for it? Schreiner said it will be a multi-pronged approached including the cancellation of the Liberals' "unfair hydro plan" resulting in $3.5 billion in savings, along with a 1.5 per cent increase in corporate taxes, and a one per cent surcharge for the top one per cent of earners.
Watch the full video from the announcement below: