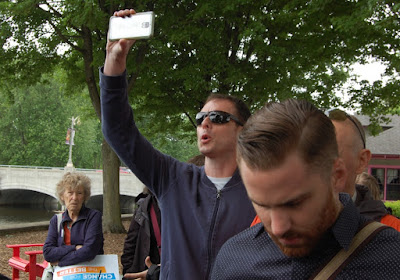 A man claiming to be a journalist injected himself into the Andrea Horwath campaign event today at the Boathouse on Gordon Street. After heckling Horwath during her prepared comments, the man said he was a reporter for "online" and asked the NDP leader about her party's stand on Ontario becoming a sanctuary province.


The "journalist" asked Horwath how the NDP can say that their platform is fully costed without a line item for the financial demands of making Ontario a "sanctuary province"?
"Our platform is completely costed, and just like Doug Ford supported sanctuary cities in Toronto, what our plan does is say that anybody that goes to an emergency ward in a hospital is going to get served regardless of their status," Horwath said.
"It's the humane thing to do, it only speaks to emergency ward services, and that speaks to something that many emergency wards already do, but not necessarily."
Finding the NDP's pledge online in their platform is easy enough. On "providing sanctuary," the platform says, "We believe strongly in the rules governing immigration and citizenship, but we will never withhold basic life-saving services from undocumented people. We will ensure that anyone can visit an Emergency Room without penalty. And we will end the practice of holding federal immigration detainees in provincial correctional facilities."
In the pledge, there's no specific reference to cost, but this has become a convenient wedge issue for the Progressive Conservative campaign, and its media allies like the Toronto Sun's Sue-Ann Levy, who wrote in a May 17 column that she suspects a bigger welfare state coming from the results of enacting the pledge, while refugees "jump the queue" ahead of seniors "who’ve paid into health care."
The "journalist" that asked the question was also heard heckling Horwath during her remarks before the media scrum. Several witnesses confirmed that the "journalist" and the heckler were the same man.
After the media portion of the event, Guelph Politico found the "journalist" at a table in the Boathouse with an associate, an stalky, older man with salt and pepper hair with a goatee. When asked again what media outlet he was with, the "journalist" said "online".
When asked if he can be more specific,  the "journalist" said "YouTube".
When asked what channel on "YouTube", as YouTube has many channels (including the one used by Guelph Politico),  the "journalist" once again said "YouTube".
When asked again what channel on "YouTube", the journalist said it can be Googled because he shares the video "online".
At this point, Guelph Politico gave up vaguely amused by the man's posturing.
So why make a big post/deal of this? It's people like this, who are using the cover of journalism to harass and disrupt for political purposes, that make those of us working hard to deliver actual journalism online struggle for time and legitimacy.
Guelph Politico is proudly Guelph Politico, and its credentials are easily available.
Posted by Adam A. Donaldson at 12:40 PM