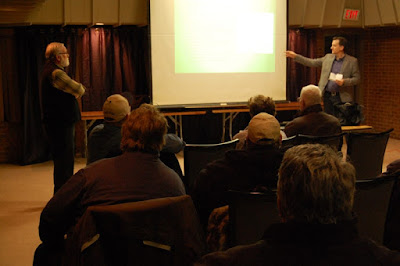 If you're looking for something to do on Wednesday September 28, then you're in luck! You will have your pick of three major political events in the Guelph area to check out.


First up, the Guelph & Wellington Task Force for Poverty Elimination, Guelph Community Health Centre and CFUW Guelph will ask the question: "Can a Basic Income Guarantee Eliminate Poverty?" Shelia Regehr, chairperson of Basic Income Network Canada will be the keynote speaker, and will be joined on stage by Peter Clutterbuck of the Social Planning Network of Ontario, Noah Zon who's Director of Policy and Research for Maytree, and Dr. Nicola Mercer who's the Medical Officer of Health for the Wellington-Dufferin-Guelph Health Unit. The forum will take place at 6:30 pm at the Evergreen Seniors Centre at 683 Woolwich St. You can learn more at the Guelph & Wellington Task Force for Poverty Elimination website.
A little later that night at 7 pm, the Ward 1 councillors will be holding their second town hall of the year at City Hall. Councillors Dan Gibson and Bob Bell will be discussing the budget process, how the community can get involved, and answer your questions on all other matters from 7 to 9 pm at 1 Carden Street. The details were made available through Gibson's blog.
At that same time in Kitchener, Fair Vote Canada's Waterloo Region office is bringing former chief electoral officer (1990-2007) Jean-Pierre Kingsley to town to talk about electoral reform. Kingsley has been outspoken about the need for further investigation into the Robocall scandals of 2008 and 2011, and he will be following up a recent visit to K-W by Minister for Democratic Reform Maryam Monsef for a town hall about the pending alterations to Canada's electoral system. You can hear from Kingsley at 7 pm at the Auditorium of the Kitchener Public Library, 85 Queen Street North. Get more details at the Fair Vote WR website.
Posted by Adam A. Donaldson at 11:17 AM